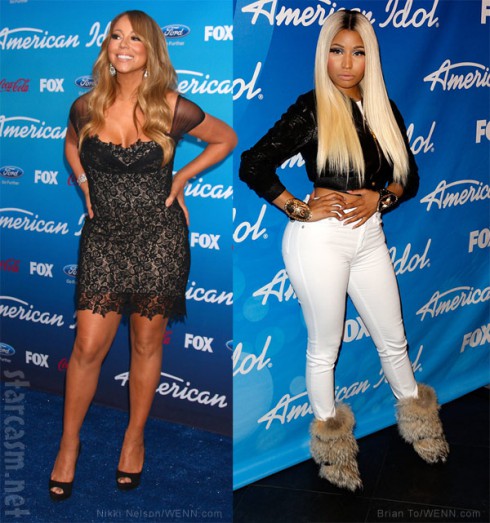 Mariah Carey is a true global icon — one of the most accomplished artists on the planet — and we feel extremely fortunate that she was able to bring her wisdom and experience to the American Idol contestants this season. We know she will remain an inspiration to Idol hopefuls for many seasons to come.

Nicki Minaj must not have cared too much for her rival judge hogging the accolades spotlight because two hours and six minutes after the PMK•BNC tweet, Nicki Minaj took to Twitter herself and announced she was officially leaving as well:

Thank you American Idol for a life changing experience! Wouldn’t trade it for the world! Time to focus on the Music!!! Mmmuuuaahhh!!!

That tweet had the PR team at Fox, FremantleMedia and 19 Entertainment trying to come up with another complimentary statement — this time about Nicki — which they did:

Nicki Minaj is a superstar who brought a level of honesty and passion to American Idol and who had a tremendous positive impact on so many contestants this season. Given her extremely busy career, we understand and respect her decision and wish her the best.

Mariah and Nicki join the exiting Randy Jackson, which leaves only Keith Urban from the 12th installment of the series — and there has been no word one way or the other on his fate, from him or the network.

In case you missed it, the constant feuding between Mariah Carey and Nicki Minaj seemed to backfire on Idol producers as they attempted desperately to stop the show’s ratings freefall after the addition of singing competition shows like The Voice and The X Factor on competing networks.

The network hoped that Minaj would help bring in younger viewers, a demographic being gobbled up by Idol‘s flashier competitors. (The average age for American Idol viewers is now 52.2) Obviously that did not work. The Season 12 finale that saw Candice Glover take home the title of American idol was down 40% in the ratings from the previous season and was the lowest ranked finale in the history of the show.

My guess is that Fox will want a clean sweep and go ahead and start penning their complimentary exit statement for Keith Urban as the media rumor mill cranks up to full speed on who the new judges will be. I recommend Idol fans pay attention to all the casting drama because (sadly) that’s kind of the best part of the show now.

Who do you think should be a new judge on American Idol? Adam Lambert? Jennifer Hudson? Triumph the Insult Comic Dog? That sounds like a pretty good trio to me!