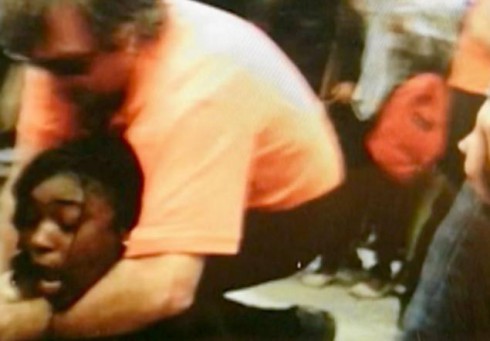 The above photo of California principal Todd Whitmire appearing to place 15-year-old Ashley Johnson in a choke hold, while allegedly breaking up a fight, resulted in the suspension of multiple students after it was shared via Facebook.

Whitmire has stated in an interview that the image is not what it seems. “I had separated her and she began struggling and I was pushing her away to get her away from the area and she fell down,” he told the Contra Costa Times.

The image was snapped by a student and then shared via Facebook. Whitmire explains that the subsequent suspensions of students who disseminated the image were not because of how the image could be misinterpreted, but were based on racist and derogatory comments made in reaction. “It was the reposting, the retweeting, and keeping it alive and assigning negative comments to it and creating a hostile environment.”

Johnson, seen lying on a couch at her home in a neck brace, disagreed with Whitmire’s take on what transpired in an interview on Tuesday with KTVU. She said, “I wasn’t fighting back I just laid there on the ground.” She now blames Whitmire for injuries she claims she’s suffered from the incident. 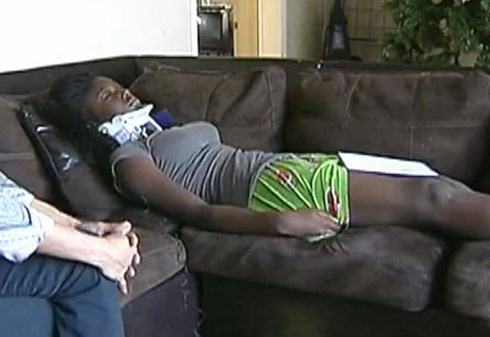 Video taken by a school resource officer at the school on Monday, the day before the interview with KTVU, is said to show Johnson moving around freely in a classroom.

Lt. Ron Raman, who was already on campus with several other officers when the fight took place, said that there is no evidence battery took place and that there are no charges pending for the principal. Raman says it was students’ now closely monitored activity on social media that tipped him and the other officers off to a planned fight that day at the school, which lead to their presence in force.

“We had some information through social media that several students were planning a fight. So we had our school resource officers and additional officers show up to the school to (back up) staff. We had at least six officers and a supervisor there.”

Several fights did break out in the quad area as anticipated. Raman added, “During (the melee), staff members were pulling people away from one another. The principal tried to pull a student away and she fell and he fell down with her.”

A California state law has strengthened anti-cyber bullying laws to include posts on social media sites. 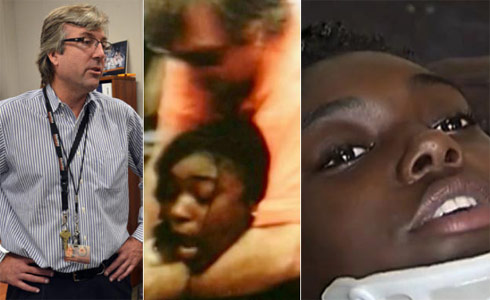 A few questions for our readers…

• Do you think that schools and the the police should have the legal ability to monitor activities on sites like Facebook and Twitter, or is this a violation of rights?

• If the officers were there in numbers then why was Whitmire needed to physically intervene?

• Are you more prone to believe Whitmire’s version of Johnson’s — or do you feel the truth lies somewhere in the middle?

• Do you think that students should have been suspended from school for comments made or sharing the photo?

Should tasered stepfather have been allowed to try and rescue son in house fire?