More than 20 years after she made news as Bill Clinton’s supposed mistress of 12+ years, Gennifer Flowers claims to have something else on the first family: She says Hillary Clinton’s bisexual.

“I just know what Bill told me and that was that he was aware that Hillary was bisexual and he didn’t care,” Gennifer exclusively told The Daily Mail. “He said Hillary had eaten more p***y than he had.”

Gennifer first came forward with claims about the Clinton family during Bill’s 1992 presidential campaign. At the time, the Clintons put on a united front and denied her accusations. However, Bill admitted during a 1998 legal deposition that he had sexual relations with Gennifer “one time.” He infamously also admitted to having an affair with Monica Lewinsky while serving as president. 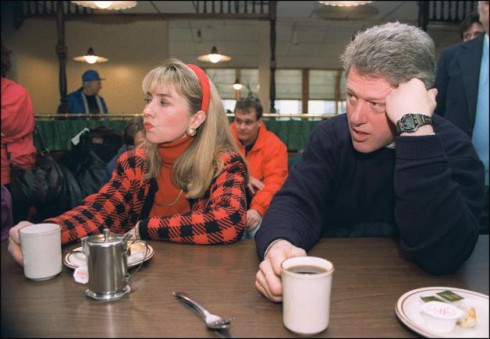 Gennifer reportedly made more than $1 million from a nude Penthouse photo shoot she did in 1992 while riding the waves of publicity. Her latest revelation precedes her debut as a sex columnist for The Guccione Collection.

In her new interview, Gennifer said she rationalized her lengthy affair with Bill because she never considered his relationship with Hillary “a traditional marriage.”

“Bill and I would be together today if it wasn’t for politics,” she said, adding he asked her to talk in 2005, but she turned him down. “He was the love of my life and I was the love of his life and you don’t get over those things.”

Gennifer’s claim that Hillary’s bisexual is not unprecedented.

Even Gennifer has tread in these waters before: In a 1995 tell-all book, she repeated a similar story about Hillary.

“He told me she was bisexual and I even know one of the women she was rumored to be having an affair with. Bill called hillary ‘Hilla the Hun.’ She was pretty tough, but so was he,” she said during an interview in the 1990s.

In response to these rumors, the former Secretary of State has always played her cards like a political pro.

“It’s not true, but it is something that I have no control over,” Hillary said in 2007. “People will say what they want to say.”