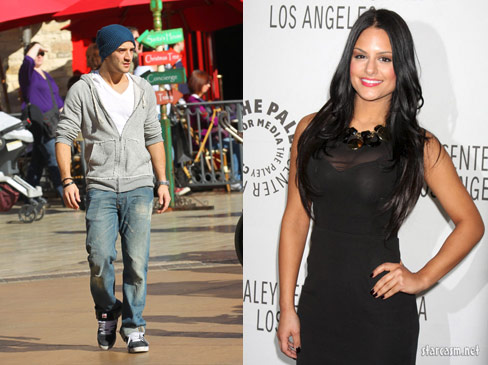 Adding more fire to the theory that being shockingly voted off American Idol was the best thing to happen to Pia Toscano we now have news that the singing sensation has went on a celeb date with Dancing With the Stars‘ Mark Ballas!

This interesting love story comes on the heels of reports that Pia was close to inking a record contract with Interscope Records.

TMZ has a certifiable break down of how this hook up came to fruition and it’s an interesting study in celebrity match making.  According to sources Pia had been crushing on Mark for a while and the two just so happened to be filming their respective shows at the same place, the CBS Television City lot in LA.  It turns out that Pia had a bf who was a bf of wrestler Chris Jericho who is currently competing on DWTS.  Pia passed on a note with her digits to the friend who relayed it to their friend who relayed it to Jericho who relayed it to Mark.

Mark was pretty excited as you can imagine going as far as to reschedule a music video shoot, Mark sings too, in order to go on the big date that went down on Friday night.  Sources state that things went well and the two are ready to do it again.

Does this make Mark Ballas an American Idol rebound?  Without question it makes Mark one lucky dude!