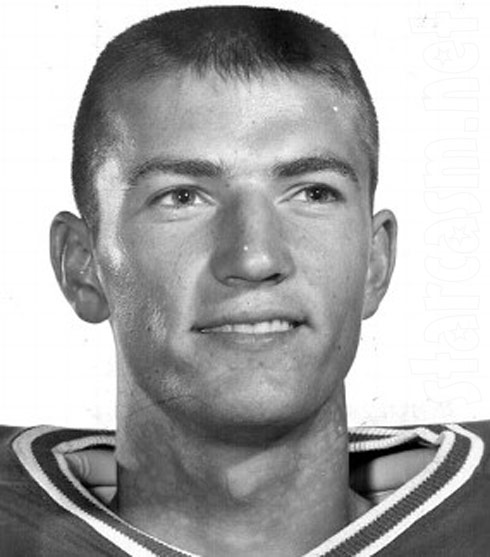 The Robertsons of Duck Dynasty are larger than life, and they’re always stirring things up. Jase can’t visit a country club without it turning into an illegal frog hunting expedition in the golf course ponds. Willie can’t get into a fitness routine that doesn’t involve shake weights and awkward yoga poses. And Si can’t go camping, load a grill on the back of the truck, or do anything else without something going terribly funny. (If you think I’m exaggerating, go back and rewatch the episode where Si cooks lunch for the boys on their RV trip to pick up Willie’s new ATVs. Si’s got the redneck midas touch.)

But, in the middle of all the Robertson craziness, there’s one stable, quiet, happy happy happy center of gravity — Papa Phil Robertson, the Duck Commander himself. Notice that you never see Phil at the warehouse or the duck room or on the RV road trip or camping out before the first night of duck season. Phil is always knocking around on his (distinctly un-yuppyfied) property, helping out with Ms. Kay and the kids, getting ready for church, or holding down the head of the table for family dinners. Always. 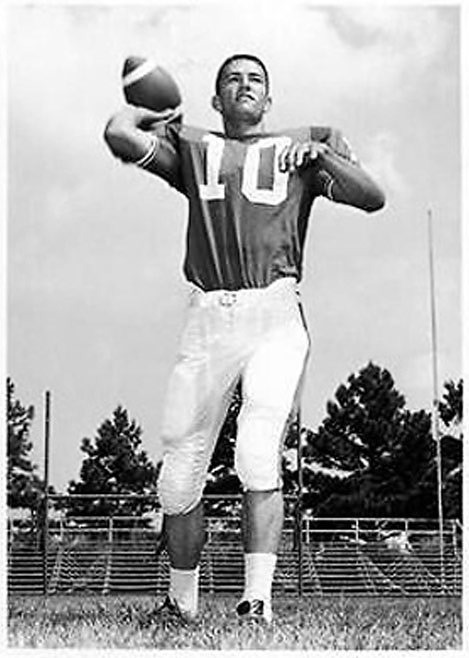 But Phil didn’t always stay on the sidelines. As a young man, he did exactly the opposite, literally, and led the Louisiana Tech football team as their quarterback. In this fantastic video footage from Tech’s 1966 game versus Alabama, we can see young Phil in action. Dude’s got an arm! And, watch him drop his shoulder and run the ball when he needs to. Phil was a playa y’all!

This game didn’t go Louisiana Tech’s way, but Phil can’t take all the blame for that. The other quarterback, #12 for Alabama? That’s future NFL MVP Ken Stabler. 1966 is the year he led Alabama to an undefeated season. Not exactly an easy match up for Phil and the Bulldogs.

Oh . . .and keep an eye out for when the camera gives a glimpse of the bench. I couldn’t find him, but somewhere sitting on the Tech sideline, wishing Phil would make a mistake and give him a chance to take the field, is #12 Terry Bradshaw. Here’s an excerpt from the 1967 Louisiana Tech football program in which you can see photos of Phil Robertson and Terry Bradshaw side by side! 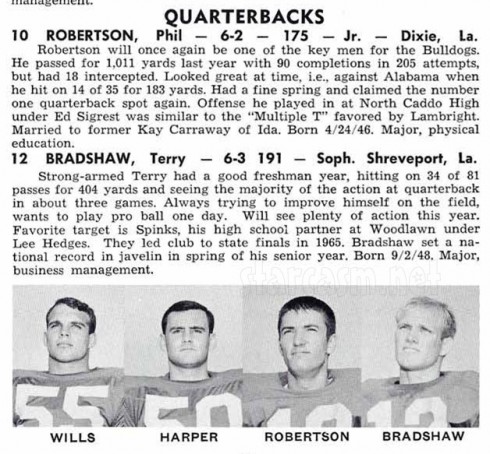 And did you read the description for Phil? Ms. Kay, who was already Phil’s wife at the time, was already getting her props! 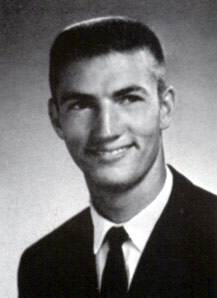 According to an interview he did with ESPN, Phil’s mind wasn’t entirely on football even when he was quarterbacking the team.

One time a bunch of geese came over and I was over there with the coach and talking about techniques or whatever, a big skull session on the practice field. I heard these geese. Remember we were practicing in the fall of the year — and the grand passage as we call it — the ducks and geese were coming from Canada. I heard these blues and snow geese coming over and I sort of fell into a trance. Of course I had my headgear next to my chest and I’m looking toward the sky and finally one of them coaches looked around, and he started cursing at me, “What the hell you doing son? Get over here! What are you looking up at?” I said, “A bunch of them geese, Coach. Boy they pretty, ain’t they?” He said, “Get your butt over here.”

Wondering what that scene may have looked like? Here’s a great photo from the Louisiana Tech yearbook in which you can see Terry Bradshaw (top left) and Phil Robertson (top row, third from the left #10) “listening” to Assistant Coach Mickey Slaughter. (Phil already has the “happy happy happy” face — I’m guessing he’s thinking about geese and not the “Multiple T” offense.) 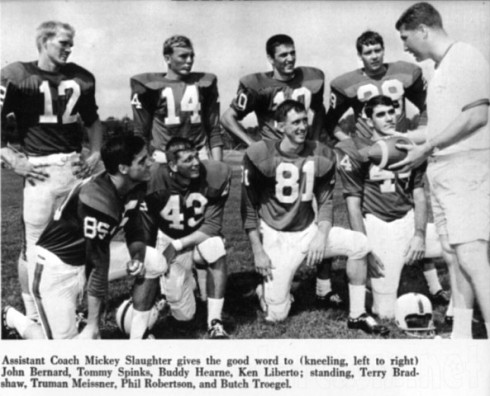 And if you think Jase is the only Robertson to run afoul (ahem) of the way folks expect you to live in civilized society, check out this story about Phil’s hunting lifestyle getting him into a little trouble at tech.

One time the dean of men called me into his office. When you go to the dean of men you had messed up somehow, and what he said was, “Mr. Robertson, do you realize the name of that street you live on? Would you give me the name of that street?” “I’m thinking, what the heck is it?” He said, “Let me help you out. It’s called Scholar Drive. You live on Scholar Drive.” He said the president of the university had some dignitaries over and he said he was showing them Louisiana Tech’s facilities and he said, “Mr. Robertson, I got to tell you, when we got to your house there were nets, there was duck feathers and blood on the sidewalk, an old deer hide and antlers and a bunch of old junk piled up.” And I said, “Dean Lewis, that’s my equipment.” And he said, “I want you to get out there and get that stuff out of sight because it’s just not real scholarly, Mr. Robertson.”

So how did Phil stack up against Terry Bradshaw, who would go on to win four Super Bowls as the quarterback of the Pittsburgh Steelers during his Hall of Fame NFL career? “I had the arm,” Phill tells ESPN. “The ability was there. Bradshaw probably had me a little more on distance. I was about a 65-yard man. … I remember at some point, Bradshaw and I would get out there and he would throw like 70-plus.”

What Phil lacked on distance he made up for with quickness! “As far as delivery, you could study the films, his delivery or mine, but my delivery was quicker than his (Bradshaw’s). … I didn’t come back too far. It was all from about the ear, from there forward.” 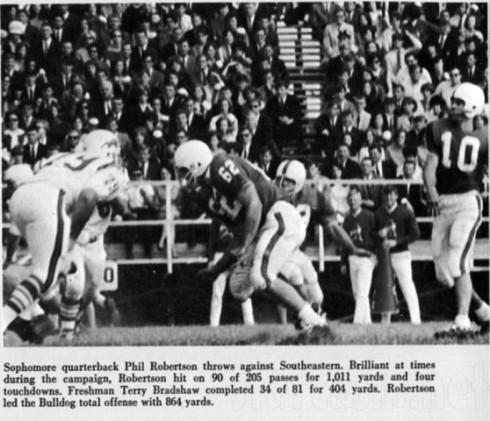 Terry talked about Phil in his 2001 book It’s Only a Game, and it’s exactly like you would imagine. “The quarterback playing ahead of me, Phil Robertson, loved hunting more than he loved football. He’d come to practice directly from the woods, squirrel tails hanging out of his pockets, duck feathers on his clothes. Clearly he was a fine shot, so no one complained too much.”

This is the part where Paul Harvey steps in… Despite being recruited by the Washington Redskins, Phil walked away from a pro football career . . . because it conflicted with duck hunting!

The choice came down to me in the woods hunting ducks, or getting in a situation — a lifestyle — wherby large, violent men are paid huge sums of money to do one thing, and that’s stomp me in the dirt. I said, you know, I just think it would be less stressful to go after ducks.

And now you know the rest of the story… 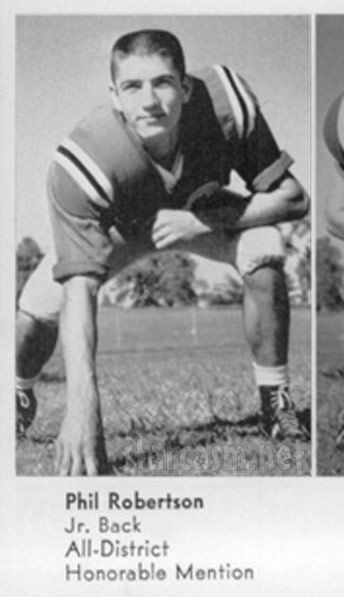 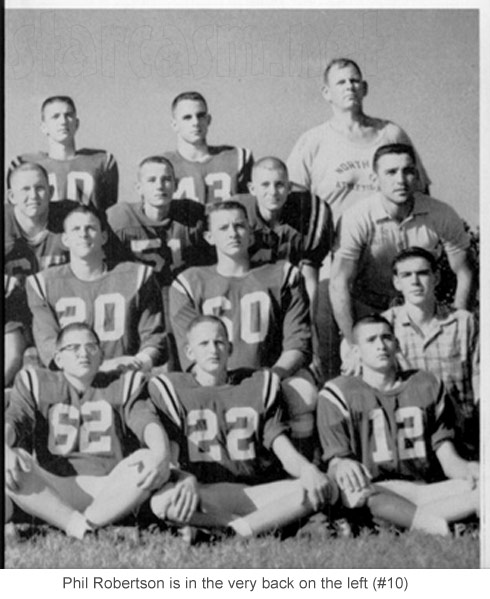 UPDATE – Phil wasn’t the only Robertson to handle the pigskin for North Caddo HS! Check out these photos of his little brother Si Robertson decked out in his football gear from the yearbook!