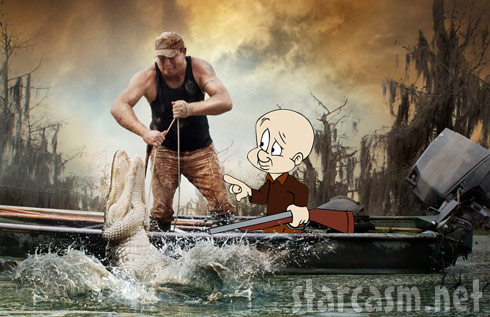 When Troy Landry, Willie Edwards, and the other stars of Swamp People catch an alligator on a hook baited with rotten chicken, pull the line in, and wrestle the beast to the side of their boats, their work is far from done. In fact, it is just getting started. You can’t just pull a live alligator out of the water and throw them into your boat (unless you’re Terral Evans). You have to kill the gator first.

Killing an alligator, even one that’s hooked on the other end of a line, isn’t an easy task. An alligator’s skin is like armor–bullet-proof armor. Shooting an alligator in the tail or the back or the head won’t do anything. He might twitch a bit or try to dive down to safety, but it won’t really phase him. It certainly won’t stop his jaws from chomping down on you or his tail from knocking you around.

Here’s a nice clip illustrating how to make a gator really angry, as well as your hunting partner:

Shooting an alligator on the soft part of his belly or leg or even inside the mouth won’t do you any good either because alligators have something like an auto-pilot setting built into their nervous system and so they just keep coming. In the long-run, of course, an alligator may die from a shot to one of those soft spots. But, in the short run, it just makes them mad. If they were annoyed before you shot them, then they’ll only be more annoyed afterwards. That’s not good.

If you’re objective is to get the alligator out of the water and into your boat, you want to slow the beast down, not motivate it to fight harder. And, if you’re alligator hunting because you want to make a buck selling the hides, putting a bunch of holes in an alligator’s skin is . . . um . . . a little counter productive, shall we say.

So . . . what do you do? Well, you shoot the gator in the famous “quarter-sized kill spot” on the back of its head. This is the only good spot to kill a gator for one reason: it is the only place on an alligator’s body where you can shoot straight into an alligator’s tiny brain.

Here is an amazing virtual 3D video put together by the The 3D Alligator Project at Ohio University and the University of Missouri showing the anatomical structure of the head and skull of the American alligator. It was rendered from CT scans using Amira and QuickTime by Ryan Ridgely, and labeled by Jason Bourke.

Here are a couple photos showing the location of an alligator’s brain with still images taken from the video: 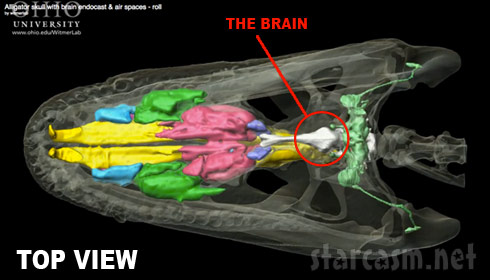 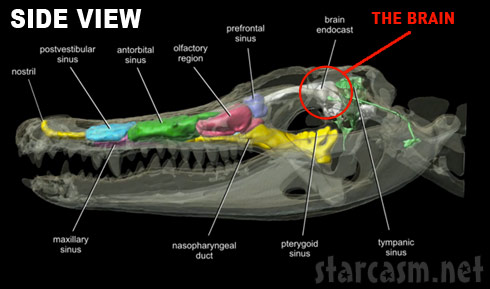 But, an alligator comes equipped with a very thick skull that protects his thinking muscle from above and from the side, and as a result, you have to come at it from a little bit further back. Sooooo… here’s the adjusted position of the mythical quarter-sized kill spot illustrated on an alligator skull: 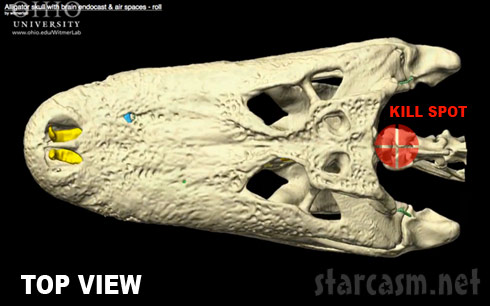 Hit that tiny bullseye, and the gator dies immediately. Shoot him anywhere else, and you’re just asking for trouble, and lots of it. As a bonus, the hide on an alligator’s head doesn’t mean anything to buyers and manufacturers, so hitting the “kill spot” also means avoiding all the money-making bits.

That’s not quite all there is to it, though. Even if you know right where the “kill spot” is, not every shot on it will be equally effective. Since the bullet is entering behind the brain, you have to shoot at an angle from behind and above the gator with the gun pointed roughly in the same direction that the gator’s nose is pointing. Shoot straight down or from the front, and even if you hit the kill spot or the brain location, you still might not get through.

Here’s an illustration of the angle needed for a “clean kill” on the first shot:

Through stunning videography and super slow motion sequences depicting the final seconds of an alligator’s life, Swamp People does an amazing job of portraying the courage and skill required to catch and bag these monstrous carnivores. But, even that beautifully produced, high-definition footage can’t really depict how tiny the margin for error is when you point a gun at an alligator.

When Tommy hunted gators on his own in season two of the show and decided to shoot at them in open water, we got a sense of what an incredible sharp-shooter he really is. But, in the season finale, when he kills 10 alligators with 10 bullets, we were witness to something really special. It just might not have looked that way, since he made it look so easy.

And just in case you are reading this post because you have a gator knocking on your front door and you really, really, really need to know exactly where to shoot him with your one bullet, and looking at computer generated images of alligator skulls hasn’t instilled the confidence you were looking for, here’s the kill spot on a real deal alligator. 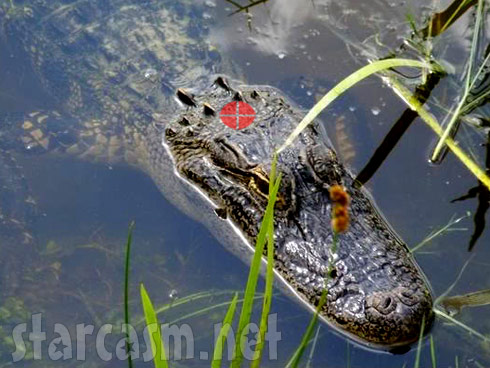 *** PLEASE NOTE – Shooting an alligator yourself is highly dangerous and more than likely illegal and not something this site – or any of the Swamp People – would recommend.