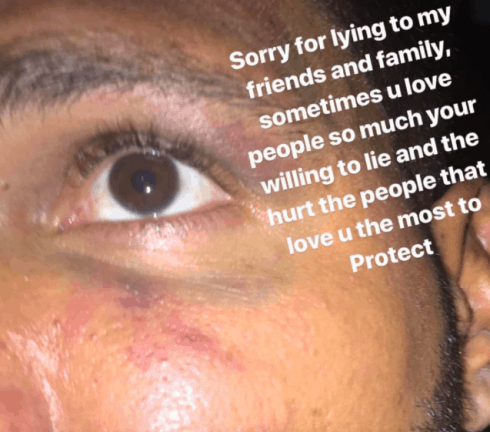 Last night’s episode of Jersey Shore: Family Vacation dealt with the return of Ronnie Ortiz-Magro’s girlfriend Jen Harley on the show after a violent showdown in Las Vegas. Ronnie assured his wary castmates that everything was fine with Jen. Yesterday in real time, Ronnie shared a photo of himself with a black eye on social media – alleging that it was Jen who hit him in the face.

He captioned the photo, which he posted on his Instagram story with an apology for “lying” to friends and family about the state of his relationship. Despite all the turmoil and violence Ronnie and the mother of his child have endured over the past few months, they have recently been projecting a story of harmony and stability to the public. Ronnie’s post yesterday shattered that illusion.

“Sorry for lying to my friends and family,” he wrote. “Sometimes u love people so much your (sic) willing to lie and the (sic) hurt the people that love u the most to Protect.”

“He’s lying. I’ll prove it again with the car thing I can’t deal with a drug addict anymore it’s getting so out of control (sic).”

Jen reportedly responded in a comment posted in her private Instagram. She said he was lying and accused him of being a drug addict. “I don’t post my s–t on IG lol,” she reportedly wrote. “He’s lying. I’ll prove it again with the car thing I can’t deal with a drug addict anymore it’s getting so out of control (sic).”

The pair have been trying to stay together for the sake of their 6-month-old daughter Ariana, but it looks like the situation has gotten to be far too toxic to be a safe environment for the child.

During last night’s episode it was revealed that Jen has been banned from all Caesars Group properties after the incident in Vegas. At the time the Jersey Shore cast was staying at Harrah’s in Altantic City and Ronnie and Jen were pulled aside by security. They assured them that they had attended couples therapy and would be on their best behavior. They later lied to the cast and said Jen had been pulled aside because she forgot her ID.