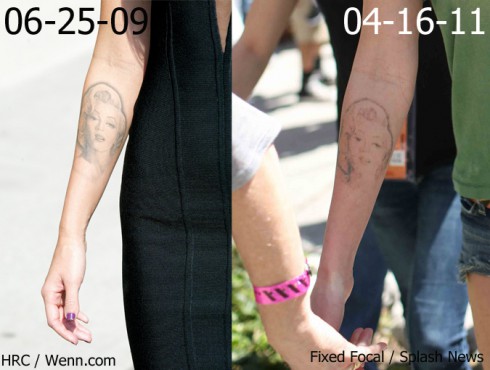 Starlet Megan Fox is gradually getting rid of the prominent Marilyn Monroe tattoo on her right forearm. In many ways the large portrait became a signature for Fox, and probably became an unwanted distinguishing mark. It’s definitely one of those tattoos you get when you’re young and crazy (and let’s face it, we’re all crazy when we’re young, there’s no getting around it.)

But a friend of hers told Life & Style that Megan had it done “at a certain stage in her life, and now she’s moved past that.”

Fox got the tattoo because of a passion for Marilyn Monroe. She felt like she identified with the troubled sex icon, who struggled with mental illness for years before an apparent suicide at 36. In 2009 Fox told Wonderland magazine: “I basically read every book ever written about Marilyn Monroe. I could end up like that because I constantly struggle with the idea that I think I’m a borderline personality – or that I have bouts of mild schizophrenia. I definitely think I have some kind of mental problem and I haven’t pinpointed what it is.”

Of course, Megan has admitted to lying and saying shocking things in interviews to stir up interest, and divert the press from her “real life.” Even if the Transformers actress doesn’t really think she has a mental illess, she still must have really felt a connection to get Marilyn’s mug tattooed on one of the most prominent parts of her body.

UPDATE August 2011: Megan has changed her tune about identifying with having a mental illness, and telling Amica magazine “I’m removing it. It is a negative character, as she suffered from personality disorders and was bipolar. I do not want to attract this kind of negative energy in my life.”

Now that Megan’s moving on, (and probably hoping to start landing some movie roles after a hiatus,) she has to go through a long and painful process to get the large ink removed. It’s estimated to take seven or eight excruciating sessions to remove the detail inkwork from the skin.

Even with Marilyn gone, Megan still has some tattoos: “We will all laugh at gilded butterflies” is written on her shoulder, and a quote from Shakepeare’s King Lear “There once was a little girl who never knew love until a boy broke her heart,” is on her ribs, and several more. All these tattoos are emotional and lovely, and best left in the pages of 15-year-old’s diary. But still, kudos for Megan for having the balls to get the Marilyn tattoo in the first place, and the good sense to finally get it removed.

A little tattooing isn’t the only work Megan’s had on her body. Like most people in L.A., she’s had a touch of surgery on her already gorgeous face. It’s a strange world when an abnormally beautiful girl still feels the pressure to change her face. 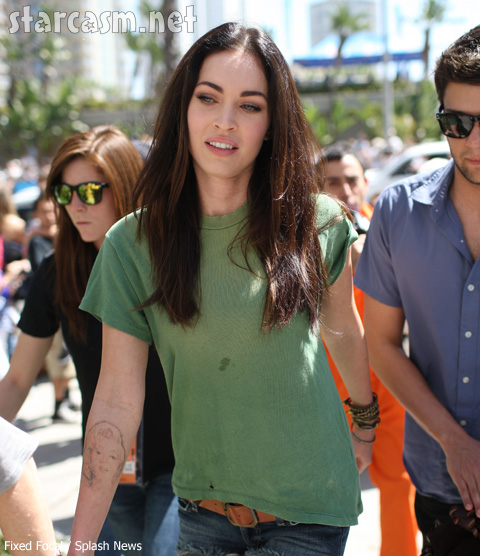