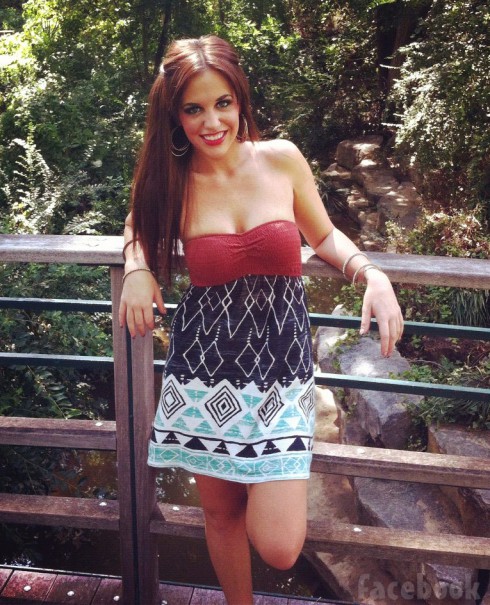 In their official description for their new reality series Big Tips Texas featuring the vivacious and salacious barmaids of Lewisville’s infamous Redneck Heaven “breastaurant,” MTV says that the gals are “working their way towards making their dreams a reality one crazy shift at a time.” One of the gals that appears to be a few crazy shifts ahead of most of the others is Redneck Heaventrepreneur Kristyn Cole, who already has a very successful line of hand-crafted fashion and accessories called The Kristyn Cole Collection!

The Kristyn Cole Collection consists of one of a kind Custom painted TOMS, apparel, footwear, and specialty items which are custom made for today’s fashion. Each piece can be designed per the customer’s request, or left to the designer’s talents, which make the Kristyn Cole Collection unique. Each piece will be custom made and the customer will never see his or her style repeated. All items are made to order.

Here are some samples of the more than 600 pairs of Toms Kristyn has painted to date, as well as Kristyn herself in her home studio: 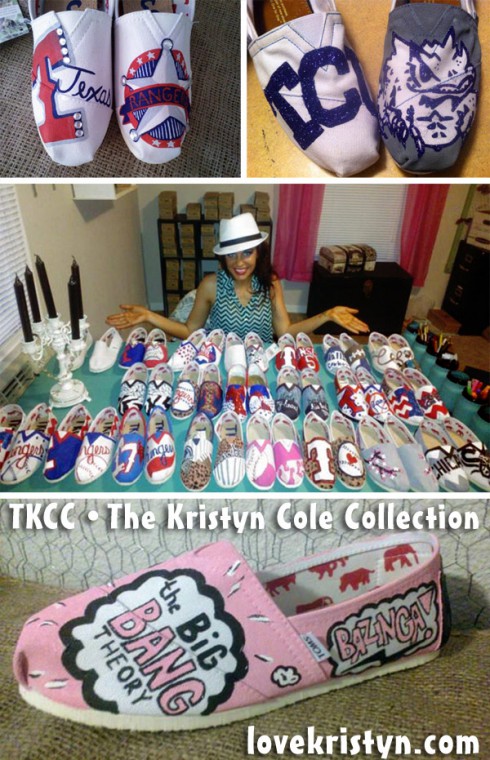 Kristyn charges $140 per pair of painted Toms and explains, “before anyone complains about that being expensive, Toms alone are now over $50 with tax, then you add in the price for all of the paint, sealant, glitter, bows, etc. and then the 5-6 hours spent painting on each pair etc, etc, etc.” The price must be more than fair because Kristyn is slammed and won’t be taking new orders until 2014 at the earliest! Kristyn posted on Facebook on September 15 that she had “75 pairs to do… 5-6 hours a piece… that is 375-450 hours to make them all. And the end of the year is when I try to take a break and spend time with family.” Now that’s what I call a girl with a lot of “sole” y’all! 😉

Of course, when Kristyn’s not painting shoes and everything else in her home studio, she’s takin’ orders and lookin’ damn fine down at Redneck Heaven, including this “Anything But Clothes” bikini with a very positive message about safe sex: 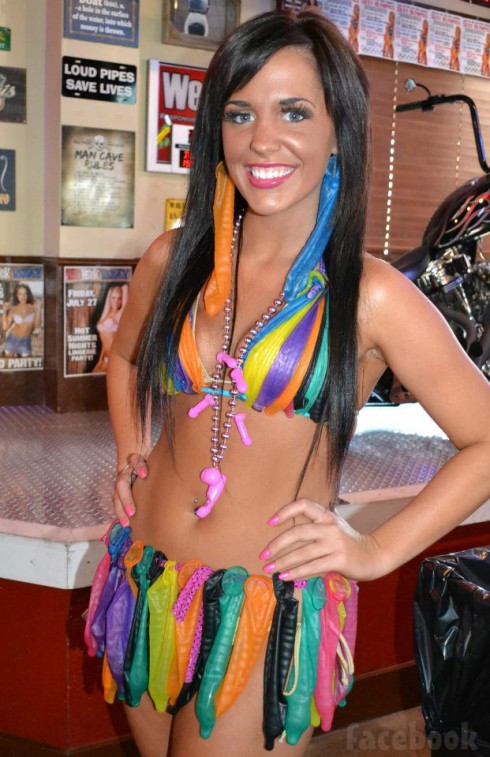 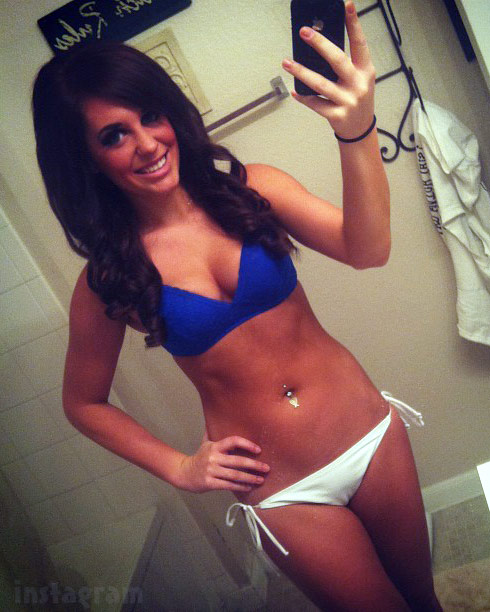 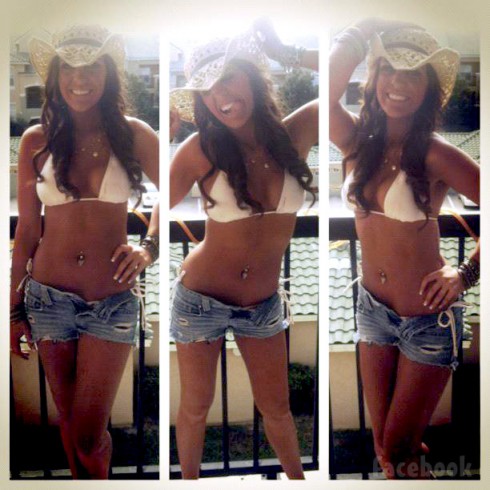 As you might have noticed, Kristyn is not only a big fan of painting shoes, she also loves to paint her face up a bit. But, Kristyn has shared more than a few “raw canvas” selfies online in which she looks dramatically different, including this one: 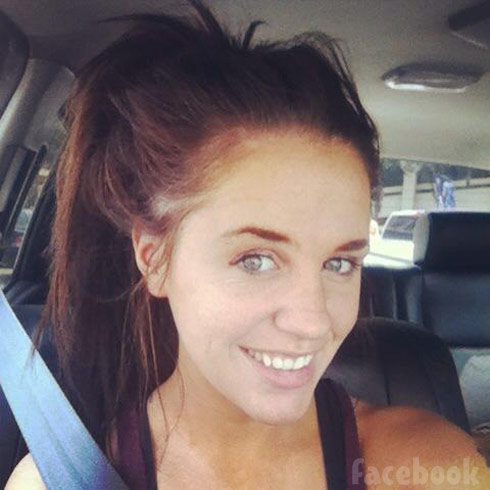 One commenter pointed out that she looks beautiful without makeup and Kristyn responded by writing, “Kristen, every girl feels better with make up on. I’m not saying I look awful without it, I just feel more confident with it. And I am an artist, so I like the dramatic look. :)”

And for those of you curious, here’s an “in between” look: 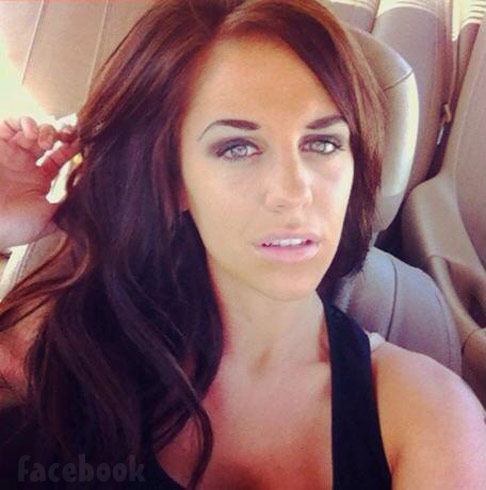 (Kristyn looks superfine either way if you ask me. But, if forced to choose, I would have to say no makeup, if only because I’m a fellow workaholic and I know that would free up more time for Kristyn to paint shoes!) 😉

With a successful online business and a Facebook page that already has more than 22,000 likes, Kristyn already seems adept at social media and it is an absolute pleasure reading through her posts. Since the announcement of Big Tips Texas she has made several entries about why she decided to do the show, but none more succinct than this one from September 20:

The main reason I wanted to be on Big Tips Texas was not to be famous and not to be rich, no, the main reason I wanted to be on Big Tips Texas is because I want to inspire people. I want someone to look at me and say “Because of you, I never gave up”. No matter what your dreams in life are, I want people to know that anything can come true if you work hard and give it everything you got. And this comment, a long with a ton of messages have been coming in recently and it makes my heart feel so good. It makes me realize that no matter what negative things people are saying about me, I know that there are people who will see me and realize what and who I really am. I want to change the world, wether that’s one pair of shoes at a time or one person being inspired by me at a time. That is my high on life.

Of course, she’s already had to deal with a number of negative Nancys (i.e. haters, i.e. trolls) and she had this to say to them:

I can count on one hand, almost two, the people who really know me and I only have a small handful of friends. But lately there seems to be a lot of people who think they know everything about me and its a hard transition to just scroll and ignore. God, give me patience because if you give me strength I will punch someone in the face. Amen.

She then shared this supportive comment from a fan that Kristyn prefaced by writing, “This right here. This is what I needed to hear. Lmao! Love positive people:”

Kristyn, people want you to fail. People don’t want someone to be more successful than them. Especially you. Yeah, that sucks to hear… I know it does. But you are successful, you have your own business, you’re following your dreams, and someone important noticed that and you got put in the spotlight. Sure, you walk around in shorts and a crop top to make a lot of money. Who cares? You look good and you make money… You’re doing what you want. After all it’s your life.. Who is anyone else to judge you? There not anybody. Put your damn cowgirl boots on, fix your weave, bat those big a$$ Mac eyelashes and flaunt your sh!t. I love watching you succeed… So quit letting people get to you! I want to see you go big. Put a smile on! I know you don’t whiten your teeth for nothing!

I am prepared for all of the hateful comments and judgement. What I wasn’t prepared for was all of the people who have my back and are responding the way I wish I could. And for that, I cheers and say “HELL YEAH TO TRUE FRIENDS”. As Drake says “I started from the bottom now I’m here.” People can throw rocks all day to try and bring me down but all I will do is fly higher. 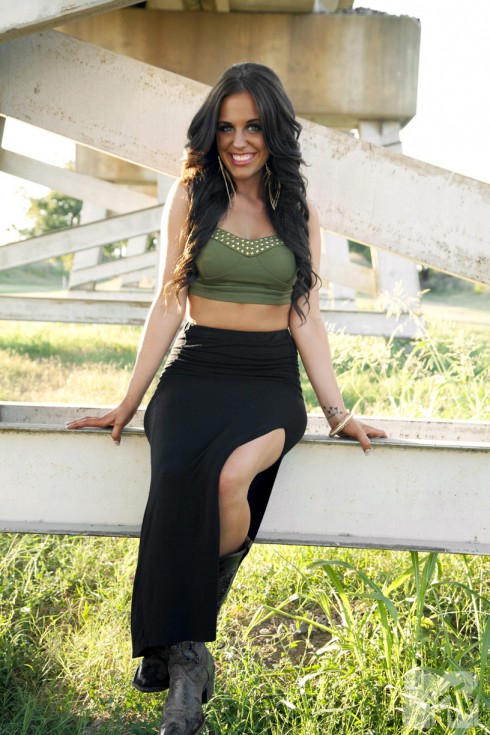 If you’re wanting to know a little bit more about Kristyn personally, here’s a brief Q&A from the Redneck Heaven Lewisville Facebook page followed by all of Kristyn Cole’s social media links, as well as TKCC’s:

Who has been the biggest influence in your life?

My grandmother, or as everyone knows her “Momma C” has been the biggest influence in my life. She has taught me how to be independent, strong, successful, and to be true to myself. She keeps me positive when all I want to do is give up, she is my number 1 fan and I am hers.

Who is your best friend?

I am blessed with more than one best friend. Morgan A, Ashley T, and Melanie P, Of course my boyfriend is my best friend as well. 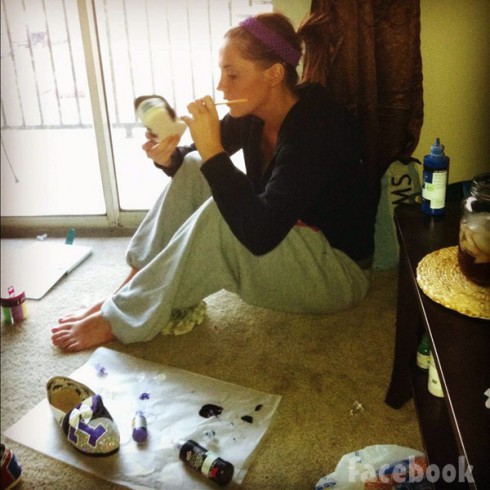 My biggest goal in life right now is to expand “The Kristyn Cole Collection”, to become successful in my dreams and hope for the best.

Have you figured out your calling in life? What is it?

I believe my calling in life is to inspire people to follow their dreams and to never give up. That’s all I want is to inspire people, I want someone to look at me and say “because of you, I never gave up” and I know I can accomplish that by following my own dreams.

I was a crazy kid! I was always laughing and smiling, I used to rip the curtains off of the walls and turn them into dresses, I would always find myself panting and rearranging my room, I knew from when I was little that I would go into the fashion and design world 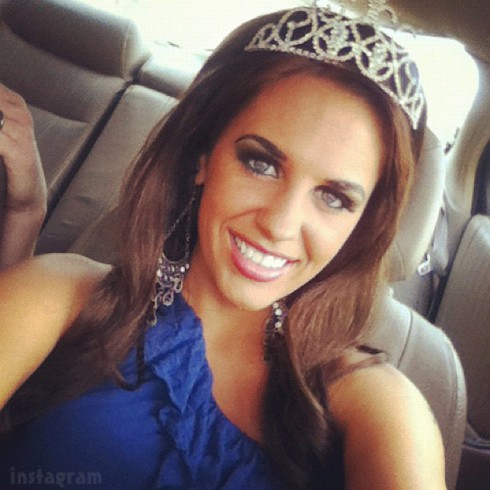 As usual with our Big Tips Texas profiles (which so far includes Typhani, “Sexy Kitty” Amber and Claire), we’ll wrap things up with some photos of Kristyn showing off a few of her Redneck Heaven work outfits, including some from back when she used to work at the Arlington location and was sporting blonde hair! 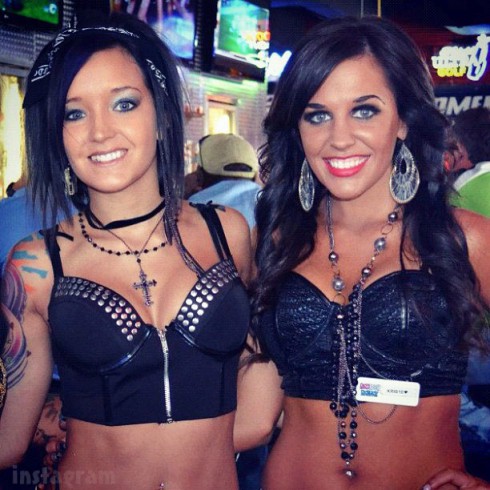 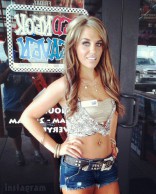 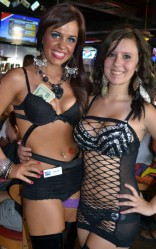 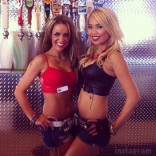 Big Tips Texas officially premieres on October 9 at 10/9c with back-to-back episodes, but there will reportedly be a sneak peek airing of the premiere episode tomorrow night (Wednesday, October 2) at 11/10c, just after the network’s one-hour Miley Cyrus documentary “Miley: The Movement.”

Beyonce looks gorgeous at “Life is But a Dream” premiere, Donald Trump thinks she shouldn’t shake her hips