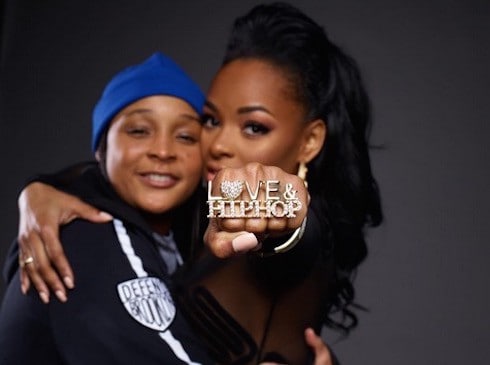 Snoop and J. Adrienne might be Love & Hip Hop New York‘s two newest cast members, but they’ve certainly ingratiated themselves in a big way. The pair took their Thanksgiving celebration to a whole new level by enjoying a massive holiday party courtesy of fellow LHHNY players Kimbella and Juelz Santana–and the Queen Bee herself, Lil Kim! The unexpected combo first cropped up on Instagram, courtesy of Snoop herself, who was celebrating her very first Thanksgiving in New York.

J. Adrienne also shared the above photo on her Instagram page, and was effusive with her caption: “Our first Thanksgiving together in New York @bmoresnoop … thanks for the love and hospitality, making me feel right at home @kimbellasworld @thejuelzsantana @lilkimthequeenbee great friends and family time is just priceless #ThanksGiving”

In addition, hostess Kimbella gave partner Juelz Santana a whole lot to be thankful for. She decided that her Sexy French Maid Halloween costume still had some life left in it, and put it on while preparing the house for the festivities:

I was a sexy "french maid" for the premier of LHHNY!! Threw this cute number on & got it poppin' in the kitchen for Zaddy ??? Makeup @iamjamalscott Hair by @bellaluxurytressess #LHHNY #BellaMondays #CatchTheSexinessEveryMondayAt8 #vH1

Happy Thanksgiving to you & your family ? Cleaning my bird earlier… ??

Juelz was quick to praise the holiday feast…

…and to inspire jealousy in LHHNY fans from coast to coast with his “litty” man cave update:

Plus, Lil Kim’s IG account let fans in even deeper with a little more behind-the-scenes Thanksgiving-ing:

Mmmm yummy there was so much food it was delicious ? That Coquito tho was on point ??L A F A M I L I A ❤️ #Thanksgiving

Considering how high the LHHNY Season 7 cast set the holiday bar this Thanksgiving, Christmas will have to be super-litty indeed to clear it 😉