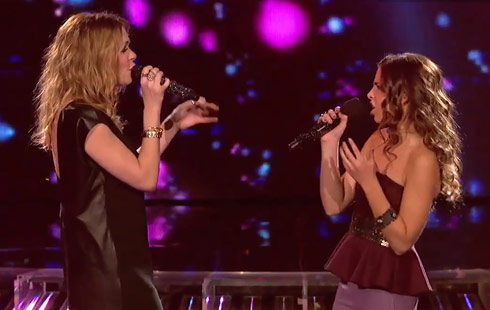 LeAnn Rimes just can’t seem to stay out of the unflattering spotlight. Her recent appearance on X Factor alongside young hopeful Carly Rose Sonenclar went over like a led zeppelin and had some wondering if Rimes was under the influence on stage.

This drunken speculation led to what TMZ claimed was a statement from LeAnn Rimes following all of the criticism. Rimes’ rep provided the following quote as a response to this negative feedback, “I was trying to help this 13-year-old girl who was having some trouble with the song.” In other words, Rimes was implying that she was doing her best to cover up for Sonenclar’s shortcomings.

LeAnn then took to Twitter (of course) with the following, denying any official statement:

“In my 18 years of performing, I have never been anything but professional onstage. It is a shame that gossip and lies are overshadowing the performance of Carly, a very talented young girl. And while I have not given any media outlet a quote, if you want one, here it is “It was an amazing opportunity to share this experience with Carly and I know I’ll be watching for her to win tonight.”

For what it’s worth I tend to believe that TMZ’s quote is authentic as they doubled down following LeAnn’s tweet. In a way, LeAnn can say she’s not given a quote as it was her rep. But when your rep provides the info and allows an outlet to quote the artist, that’s the same thing for all intents and purposes.

Here’s the duet performance in question of “How Do I Live” in case you missed it:

Now the family of young Carly Rose is firing back at Rimes for the quote she is now denying she made. Her mother in particular is furious at the thought of Rimes throwing her daughter under the bus. It’s her opinion that in many ways her daughter outperformed LeAnn.