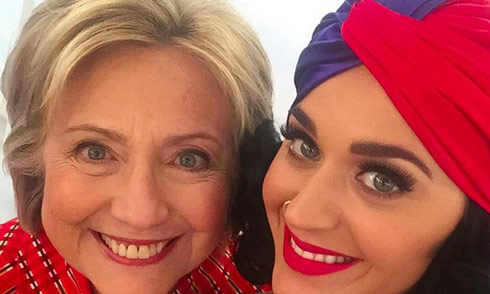 Katy Perry headlined a rally for Hillary Clinton over the weekend, and in the process, the former first lady and current presidential candidate let the pop star take over her Instagram account.

Perry, dressed in a white gown with Clinton’s logo pinned to the front and an American Flag cape trailing behind, amped up the crowd with renditions of her hits “Roar” and “Firework.”

When Perry wasn’t on stage, she was taking selfies with Clinton and showing off her campaign-themed nails:

Katy Perry here, taking over Hills' IG today for the rally in Iowa. The stage is set, and the nails are pressed. ? T-minus 1.5 hours before we Roar together. #ImWithHer -Katy

Perry said to the fans in attendance at the stop in Des Moines, Iowa:

“You have so much power and this is one of the most important elections in over a decade. So much change can happen. I believe in her future, her vision, her policies…Thank you for having me, she’s my firework.”

Perry had a warm up act for the gig in the form of former president Bill Clinton.

When Hillary Clinton took the stage following Perry’s set she said, “Sometimes it’s important, you just have to roar about what you need to fight for.”

Upon further review, it might have been more advantageous for Katy (30 million followers) to let Hillary (430 thousand followers) take over her account. 😉