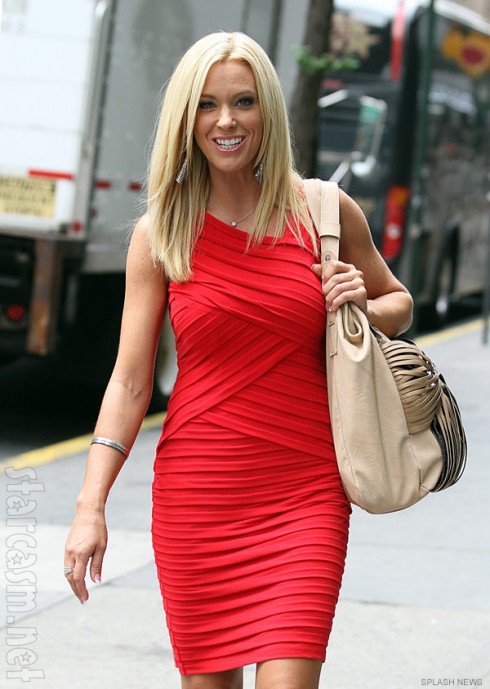 Fresh on the heels of the announcement she has signed on to do a dating reality show, Kate Gosselin was fresh on her heels in a skin-tight bright red bandage dress as she strutted the streets of New York City on Friday.

The single and ready to mingle (for profit and your viewing pleasure) mother of eight looked pretty damn good, which is nothing new for the revamped divorcee. Sadly, the same cannot be said for the other 1/9 of the Jon & Kate Plus 8 equation, Kate’s ex Jon Gosselin.

Over the last year and a half Jon has gone from working a construction job, to DJing junior high proms, to living with his mother and sharing her car. As if that weren’t bad enough, Jon returned to what is apparently the only lucrative activity in his life these days (talking to Star magazine) and said the following about his current bleak financial situation:

“I can’t afford to pay my rent and the domestic-relations staff tell me they will put me in jail unless I pay child support,” Jon, 35, told Star in an exclusive interview. “I am a single father who’s trying to make ends meet during a recession. What do I do — pay child support or rent? I need to support my kids, but I could lose my house, and I need my home to continue to have custody.

“I decided to take the high road and quit reality television and now look, I’m going to end up in jail because I can’t afford to pay child support to Kate who has plenty of money, ” the former TLC star complained.

“I’m doing the best I can, but life is so expensive with eight kids!”

“I read Jon’s statement on RadarOnline.com and was quite surprised to read that he claims to be struggling to keep his child support payments current. As of April 27, 2012, Kate voluntarily relieved Jon of all current and future child support obligations for their eight children.”

Little does Kate realize that the only way her dating reality show is going to get huge ratings is if they sneak Jon Gosselin in as one of the suitors. That seems so obvious that I’m sure it’s been mentioned in numerous other places, but I’m going to go ahead and say “you heard it here first!” anyway.

Kendall and Kylie Jenner’s net worth expected to reach $500 million, thanks to skimpy swimwear