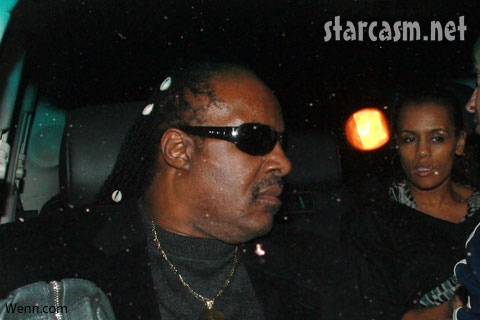 Stevie Wonder filed for divorced from his wife Kai Millard Morris July 27, 2012 after 11 years of marriage, but things have been rocky for a while.

They were married in 2001, have two boys together Kailand, 10 and Mandla, 7, (Stevie has five other grown children) but have been separated since October 2009. Coincidentaly, 2009 was the same year Kai designed a fashion line for First Lady Michelle Obama, which was endorsed by Oprah Winfrey. By 2010, however, Kai’s fashion house Kai Milla Design had gone bust.

Stevie (real name Stevland Hardaway Morris) filed for divorce citing irrevocable differences, and authorized the papers with two fingerprints. He’s got a good lawyer, Laura Wasser, who also handled the divorces of Maria Shriver, Robyn Gibson (Mel Gibson’s wife,) Britney Spears, Angelina Jolie (in her divorce from Billy Bob,) and Kim Kardashian. Stevie’s agreed to pay child support, and share custody of their two children. His assets will be divided (I guess there was no prenup,) but right now that amount is not known.

The R & B legend was previously married to Syreeta Wright from 1970-72.