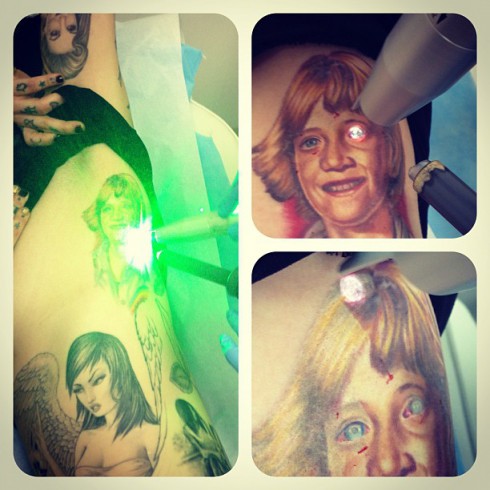 I’m sure Sandra Bullock would fully support the notion of erasing Jesse James by shooting him with lasers, which is exactly what his most recent ex did this weekend as tattoo maven Kat Von D began the process of removing the huge tattoo of 5th grade Jesse James from her side courtesy of the skilled lasers of Dr. TATTOFF, Inc.

Kat shared the beginning stages of getting de-douched on Twitter Friday by writing, “On a lighter note, I get to start the day off with some good ol’ tattoo laser removal! #ouchville #sillytattoos #creatingjobs :)” That was followed by this next photo (in which you can see the lil Jesse tat under Kat’s arm) along with the tweet, “You get to wear the most stylish pair of special-laser-shades when you go to @DrTattOffInc ! 🙂 #tattooremo” 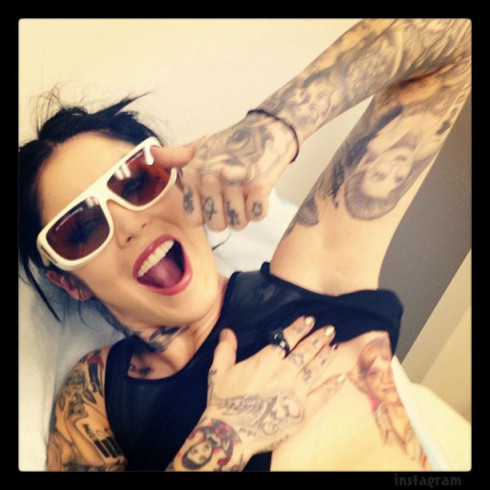 Kat then posted the photo at the top of this post showing Jesse James getting lasered right in the eye! that picture was accompanied by the tweet, “AND SO IT BEGINS! First round of tattoo removal well underway! 🙂 #freshstart”

To be honest, I’m really surprised Kat got the tat in the first place. Isn’t it some sort of tattoo parlor mantra that you should never, ever, ever, ever get your boyfriend/girlfriend’s name tattooed on your body? I think you could slap an exponent on that little nugget of wisdom when talking about getting a childhood photo of your significant other of less than five years!

Click here to watch the video clip from L.A. Ink in which Kat Von D surprises Jesse by revealing the tattoo!