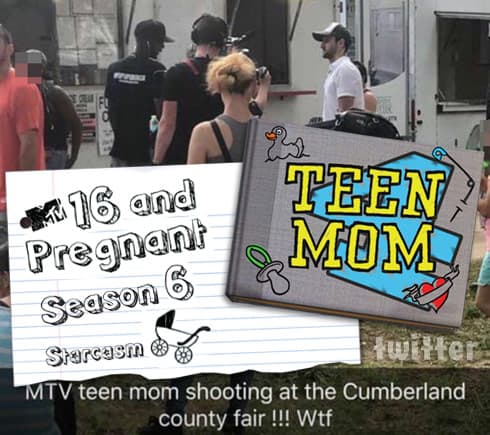 Multiple residents from in and around Millville, New Jersey are posting on social media that MTV is currently filming an expecting couple there for Teen Mom. The reports date back to last month, but earlier today we saw the first photo “proof!” 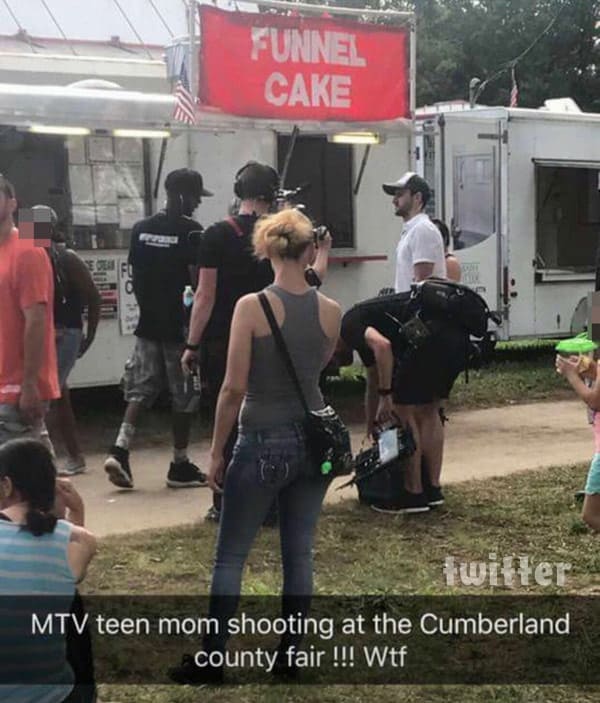 The picture (above) looks to have originated on Snapchat, but eventually found its way onto Twitter. It is an image from the Cumberland County fair and it is accompanied by the caption “MTV teen mom shooting at the Cumberland county fair !!! Wtf”

In the photo you can definitely see a TV crew, but their apparent subject is hidden. The person who tweeted the photo claims to be from the area and tweeted that “someone asked one the camera crew and they said teen mom but maybe it’s all the same to them.”

The Twitter user posted the names of the young mom and dad who are reportedly filming and reveals that her husband used to work with the young dad’s father. She says that the grandfather-to-be confirmed that the couple is filming for Teen Mom. “They also wanted to film at a local second hand children’s shop and the owners attorney is reviewing the contract,” she adds.

By itself, the above information is a bit suspect, but there are multiple other legitimate Twitter users from the area who have reported similar information. Back on June 24 a young lady showed her excitement in this all caps tweet: “THERE’S A TEEN MOM LIVING IN MILLVILLE THATS GETTING FILMED BY MTV!” And a Bridgeton, New Jersey resident joked about MTV being at the fair this weekend: “Teen Mom At The Fair Taking Applications Y’all Don’t Say I Ain’t Never Told Y’all Nun ??”

The teen mom mentioned as the cast member is currently pregnant with a little boy and due on July 27. I couldn’t pin down her age, but it looks as though she graduated high school last year, which would make her a little too old for 16 & Pregnant. But, MTV has recently issued casting calls for a slew of different reality series featuring young mothers of various ages.

UPDATE – After our initial post we were contacted by some locals and apparently there were two expecting young couples being filmed at the fair. (UPDATE – Make that 4-5 couples!) The other mom-to-be is still in high school and may actually be the subject. (She is due in early August.) Of course, it could be that they are both going to be featured in a new show altogether. Check out this casting call from MTV:

MTV is now casting for a dynamic group of young and/or expecting mothers to share their experiences with young motherhood. This group of friends (and/or acquaintances) should live in the same area and have a genuine connection with one another. We want to showcase outgoing young women who are experiencing the joys and challenges of raising children alongside other young mothers, while juggling relationships, friendships, and family.

The Teen Mom 4 casting call is actually requesting mothers of children between the ages of 4 and 7 — it is assumed this is to address the issue of their current franchises not representing the reality of being a young mother because all of the moms on the show make so much money from being on the shows. (16 & Pregnant alum Ashley Salazar applied to be a part of the show earlier this year.)

In addition to the Teen Mom 4 casting call, the network is also casting a new season of 16 & Pregnant as well as another show featuring college-aged moms. Perhaps the latter new series is what they are filming in New Jersey? Here is that casting call:

A MAJOR CABLE NETWORK IS LOOKING FOR OUTSPOKEN COLLEGE-AGED WOMEN WHO ARE EXPERIENCING PREGNANCY FOR THE FIRST TIME!

Our goal is to give viewers a look inside the realities of pregnancy – from morning sickness to managing relationships with boyfriends and/or parents and everything in-between, ultimately to the day of the baby’s arrival and beyond.

The major cable network is looking for fun, charismatic, and outgoing women, who appear to be between the ages of 18-21, who would like to share their personal story about this life-changing and complicated journey. We’re looking for all types of situations:

Is your unexpected pregnancy causing you lots of relationship drama and conflict with your family?

Are you pregnant and your parents hate the father of your child?

Are you and your mother both pregnant at the same time?

What’s your story? Please email us ASAP and let us know! firsttimemomcasting2017@gmail.com

Either way, I think we are assuredly going to be seeing more young pregnant women on MTV soon! We will keep our virtual eyes and ears out for any more reports of filming for either of the shows. If you know of anyone filming, be sure to drop us a line via Facebook, Twitter, or via email at starcasmtips(at)yahoo.com!