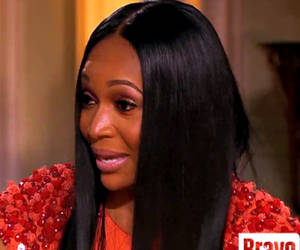 Last night on the second part of Real Housewives of Atlanta reunion Marlo Hampton and Kim Zolciak had an explosive exchange over who was a wh0re and who was an escort.

It started off nice, with Kim complimenting Marlo’s style, and then Andy asked Marlo how she felt about Kim saying this season that Marlo uses her “hole to make money.” Marlo was poised and ready to strike. She replied calmly with a comment she had probably been rehearsing “Kim, when you said that it really did bother me because I feel you and I are cut from the same cloth. Know what? I take that back. You’re a wh0re. You ruined a happy home. I never dated a married man, so the next time you talk about my hole between my legs, measure yours. ”

Kim had her own counter argument. “First of all, I didn’t ruin a happy home. Absolutely not. So, that’s a lie, number one. Number two, I’m not a wh0re. Number three, I’m not an escort, you are. Big difference.”

Kim supported her allegation that Marlo is an escort by saying that she knows a lot of people who know Marlo.

Marlo also went on a riff about Kim’s engagement ring, claiming Kim Zolciak sold Big Poppa’s engagement ring to buy the one she wore for Kroy. Kim maintains that Kroy bought the ring for her.

What do you think? Is Marlo Hampton an escort, like Kim Zolciak claims?