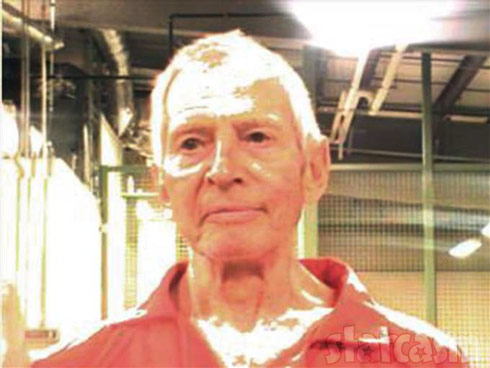 It seems that the Los Angeles Police Department may have been among the millions tuned in to last Sunday’s episode of HBO’s The Jinx: The Life and Deaths of Robert Durst, which featured what appeared to be smoking gun evidence linking Robert Durst to the murder of his former friend Susan Berman, as Robert Durst was arrested Saturday in New Orleans and charged with Berman’s murder!

71-year-old Durst was reportedly mumbling to himself when he was arrested by FBI agents just before 11PM Saturday night at the JW Marriott hotel. He appeared before a magistrate court Sunday and is currently being held without bail. He is expected to be back in court soon for an extradition hearing. Durst’s attorney, Chip Lewis, says his client will be waiving extradition and be relocated to Los Angeles to stand trial.

Lewis previously defended Durst in Texas when he was famously found innocent in the 2001 murder of his neighbor Morris Black, whom Durst admittedly dismembered and then tossed the remains in Galveston Bay. The defense argued that Durst killed Morris Black in self defense, and then chopped up his body to dispose of it because he was fearful of drawing attention to himself. (Durst was posing as a mute woman and living in a low rent apartment in Galveston at the time.) Probably because the only charge available to the jury was murder, and it could not be proved that Morris black wasn’t killed in self defense, Durst was acquitted.

As a result of investigative leads and additional evidence that has come to light in the past year, investigators have identified Robert Durst as the person responsible for Ms. Berman’s death. Investigators in concert with the Los Angeles County District Attorney’s Major Crimes Section secured an Arrest warrant for Robert Durst for the murder of Susan Berman and arrested Mr. Durst on Saturday, March 14, 2015, in New Orleans, Louisiana.

The arrest comes six days after an episode of HBO’s The Jinx aired featuring a letter sent to Susan Berman by Robert Durst that was reportedly not discovered during the original murder investigation. The handwriting on the letter appears to clearly match the writing on an anonymous letter to the Beverly Hills Police Department before Susan’s body was discovered that simply had Susan’s address and the word “CADAVER.”

In addition to the similarties in the handwriting, Beverly Hills was also misspelled as Beverley Hills on both letters. Here are side-by-side photos of the anonymous letter addressed to police (that could only have been written by the killer, or someone who knew about the murder before Susan Berman’s body was discovered) and the letter written by Robert Durst to Susan Berman in March of 1999 — click to enlarge:

And here are photos of Susan Berman’s address for comparison: 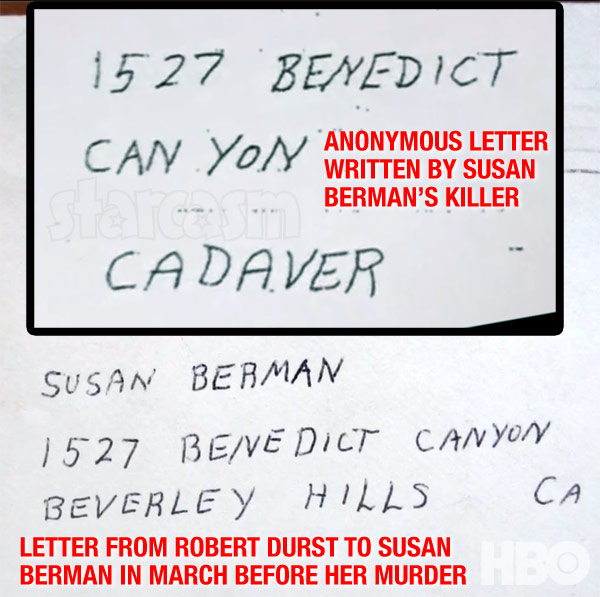 The letter was uncovered towards the end of the fifth episode with the film makers revealing that they planned to confront Robert Durst (who participated in the making of The Jinx) with the letter during the season finale airing tonight.

In case you haven’t been following along with the six-part HBO documentary (that has been seven years in the making — long before the Serial podcast took the world by storm), Susan Berman’s body was found in her home on Christmas Eve, 2000 after being shot. There was no sign of forced entry, leading police to believe the killer was someone she knew. The murder occurred shortly after it was revealed authorities in New York were reopening the investigation in to the disappearance of Robert Durst’s first wife, Kathleen Durst, who disappeared in 1982.

Berman was close friends with Robert Durst at the time of Kathleen’s disappearance, and she helped shield him from the media after the story began making headlines. (Berman had family ties to the Las Vegas mob and had written books that had garnered her a bit of public attention, so she was more accustomed to it.) Many believe that if Robert had anything to do with Kathleen’s disappearance and had told anyone anything about it, it would have been Susan Berman. 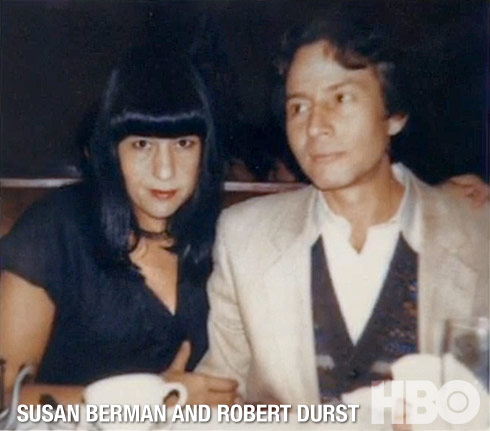 At the time the investigation into Kathleen Durst’s disappearance was going to be reopened in late 2000, Susan was having some very serious financial hardships, and it was reported that investigators would soon be talking to her about Robert Durst and Kathleen’s disappearance.

Friends and family of Susan’s told police during her murder investigation that she had said she was expecting to see Robert Durst some time around the holidays.

In December, Robert Durst flew into northern California where police have records of him taking his car out of long-term parking at Arcata airport on December 19.

According to police investigators, Robert Durst placed two calls on his calling card from the town of Garberville, California on December 20, which is about 80 to 90 miles south of Trinidad where Durst often stayed when he visited northern California. Police speculate that Durst was headed south, towards Los Angeles, where Susan Berman lived and was murdered on December 23.

Although Robert Durst usually checked his phone messages three to four times a day at the time, police say that during the three or four days prior to and after Susan Berman’s murder there was no activity at all.

For three days Robert Durst’s whereabouts are unaccounted for, until he shows up at the San Francisco airport to buy his airplane ticket on the night Susan Berman was murdered in Los Angeles. According to the coroner’s report her body had been laying on her floor for approximately 24 hours before it was found on the afternoon of December 24. Robert Durst’s flight left San Francisco for New York at 10PM on December 23 — plenty of time for him to make the 5 1/2 hour trip from Los Angeles.

It’s unclear if Los Angeles detectives have uncovered any additional information other than the letter.

Meanwhile, Robert Durst’s brother (and head of the family’s multi-billion dollar Durst Organization real estate company) issued a statement following the most recent arrest of his brother that is anything but a show of support. “We are relieved and also grateful to everyone who assisted in the arrest of Robert Durst. We hope he will finally be held accountable for all he has done.”

Be sure to tune in to the season finale of The Jinx: The Life and Deaths of Robert Durst airing tonight at 8/7c! Although I am guessing there will be an additional episode of some sort to address Robert Durst’s arrest this weekend.