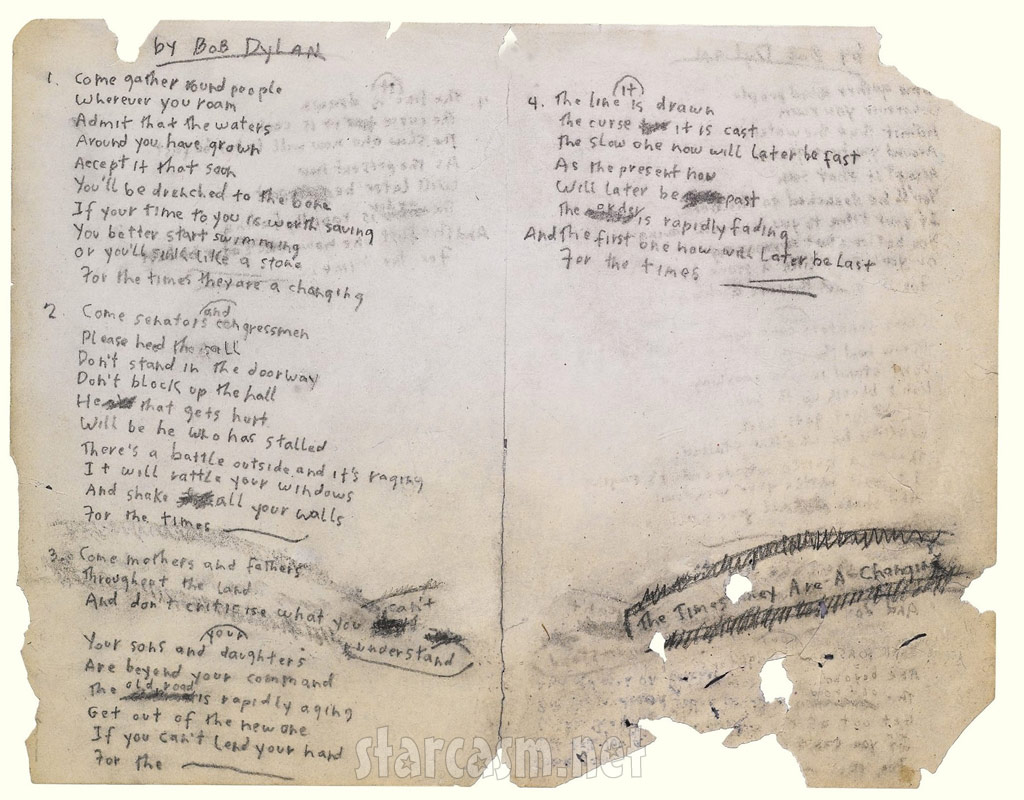 On December 10 Sotheby’s auction house is giving you the chance to not only own a piece of rock and roll history, but one of the most historically significant and culture-altering documents of the last 100 years! Going under the hammer are the original hand-written lyrics to Bob Dylan’s “The Times are A-Changin'” originally recorded by Dylan for the album of the same name 1963. (Click the above image for a larger photo)

You might think I’m being a bit liberal with hyperbole, but few would argue that Bob Dylan changed the landscape of popular music in the 1960s, and it was this song in particular that spear-headed the entire folk revival and ignited the spirit of rebellion in a generation of people not content to accept the status quo.

Bob has always distanced himself from being a “protest singer” and I’m sure he would be the first to point out that the ones singing this song almost 50 years ago are the ones having it sung back to them now, but that doesn’t change the fact that the words scrawled on this yellowed and torn unruled sheet of notebook paper capture perfectly the manifest destiny in our souls that pulls us towards making the world a better place. 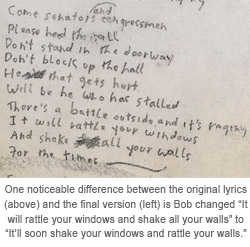 Come senators, congressmen
Please heed the call
Don’t stand in the doorway
Don’t block up the hall
For he that gets hurt
Will be he who has stalled
There’s a battle outside and it is ragin’
It’ll soon shake your windows
and rattle your walls
For the times they are a-changin’

The lyrics are expected to fetch up to $300,000 according to preliminary estimates from Sothebys. Here’s Bob performing the song in 1965:

And Bob performing it earlier this year at the White House Celebration of Music from the Civil Rights Movement. (For those unwilling to do the math, that’s 45 years later!)

I don’t know about you, but I busted my piggy bank and counted up my change! Sadly, I think my total falls a bit short of being able to score the original lyrics for “The Times They Are A-Changin'” but I may have just enough for when “Wiggle, Wiggle” hits the block!