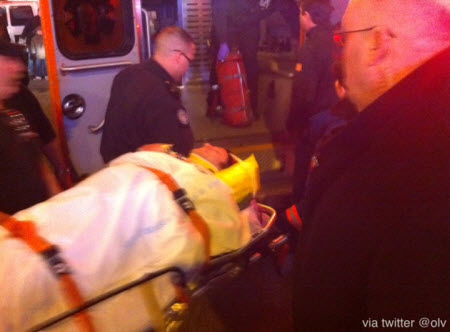 The Spider-Man: Turn Off The Dark curse continued tonight when one of the actors who performs Spider-Man’s stunts was injured after falling into the orchestra pit. The show was initially delayed then canceled as the actor was taken to a local hospital via ambulance.

According to multiple sources, the accident occurred in the second half of the show as Spidey slid down to rescue Mary Jane. Here’s a great account from a writer at onlocationvacations.com, who had a balcony seat for the performance:

But, shortly after the second half of the musical got underway, things went very wrong. Spider-Man, who was perched on top of a ramp extending toward the audience (made to look like a NYC skyscraper) came sliding down to save MJ, who was hanging from the edge of the ramp/building, but instead of catching her, they both went tumbling over the ledge into the pit.

The music stopped, an announcement was made that show was going to “pause” and you could hear people beneath the stage in a panic. “Is He Alive?”, one man shouted, while another screamed, “Call 911″. You could also hear a woman screaming in terror. It was scary (especially considering this was the first time to a Broadway show for much of the young audience).

The site posted the above photo and later in the post stated that “Spidey came out on a stretcher, awake and talking, which was good news.”

As initial reports of the accident and show cancellation began to flood Twitter, there was much speculation that the actor injured was lead man Reeve Carney, but it was later confirmed to be another Spidey actor, although his true identity has yet to be revealed. From Broadway.com:

“He fell several feet from a platform approximately seven minutes before the end of the performance, and the show was stopped,” said production spokesperson Rick Miramontez, who would not reveal the identity of the actor. “All signs were good as he was taken to the hospital for observation.” According to a police source, the actor is now being treated at Bellevue Hospital Center. 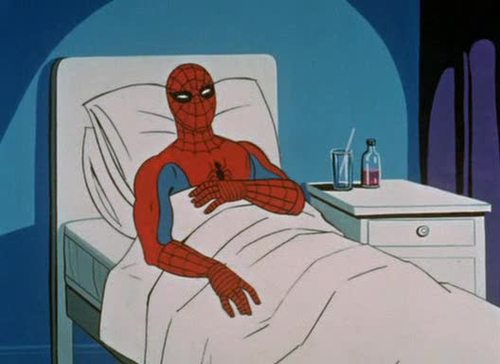 UPDATE – The name of the actor injured has been revealed – it was Christopher Tierney. The New York State Department of Labor will be paying the theater a visit during which, according to spokesperson Leo Rosales, “We’ll be talking to the production team, checking the harnesses, cables, and other equipment, and trying to determine what happened, and we’ll have more information after that.”

Here is a video of the accident itself in which you can see Tierney leaping from a ledge and his web/cable snapping:

And in case you weren’t up to speed on the Spider-Man: Turn Off The Dark curse, here is a summation of the injuries so far from Playbill.com:

In addition to Tierney, actress Natalie Mendoza suffered a concussion during the first preview of the musical. And, prior to the commencement of performances, two actors were injured attempting stunts: One actor broke both his wrists, the other both his feet.

PHOTO Johnny Cash to be featured on USPS Forever Stamp