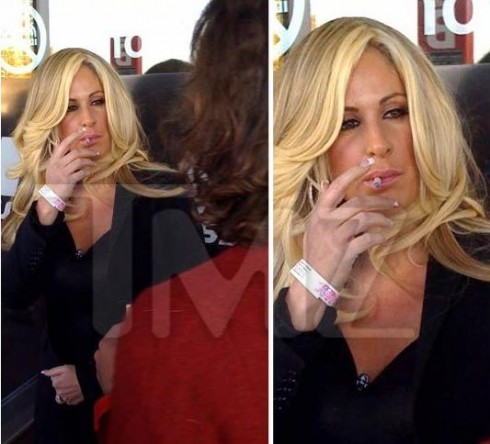 Real Housewives of Atlanta’s never tardy for the party star Kim Zolciak is denying that the above photo posted by TMZ was taken during her pregnancy.

In the post filed with the photo there is a timeline breakdown of events that insinuates that Kim was not only puffing while preggers but that the reality star knew she had baby-on-board!  Here’s the gist of the sequence of events:

The photo was taken in Atlanta on November 7, outside the Georgia Dome. Two weeks later, Kim and baby daddy Kroy Biermann (who plays for the Atlanta Falcons) announced they were expecting.  Kim told a tabloid this week she denied the pregnancy rumors in October because “[I] wasn’t through my first trimester — you never know what could happen.”

The Zolciak Twitter army has been on the warpath since the report even though Kim’s official rep is making no comment.  Here is what Zolciak had to say about the puff-n-stuff via her Twitter account:

The baby will be joining its siblings Brielle, 13, and Ariana, 9, as a cast member on the immensely popular Bravo reality series.  As of now Kim has no plans to wed baby-daddy.  This is probably a good thing, I mean all that stress could cause a girl to smoke you know!