In what may be a direct slap-in-the-face to his ex-wife and Real Housewives of Beverly Hills cast mate Camille Grammer, Frazier star Kelsey Grammer has purchased and will be moving into a lavish multi-million dollar New York City Apartment with his fiancee, former stewardess Kayte Walsh.

During airings of RHOBH Camille certainly has complained about how “tiny” her old NYC apartment was with her ex-husband.  When she says tiny she’s referring to a 3,000sf 3-bedroom residence the two used to share, which I can assure you ain’t so insignificant to your average Manhattan dweller.

So how much of an upgrade is Grammer’s new digs with his younger fiancee?  Well the new pad has four-bedrooms (opposed to just three) and is reportedly much bigger.  Can’t you just feel the wet heat of Camille’s steam all the way from Beverly Hills?  Not only did he super-size his NYC apartment with his new and much younger fiancee but Kelsey was diligent in his attempts to keep the apartment purchase a secret from Camille with whom he’s currently in divorce proceedings with.

They’ll soon be shacking up at 100 Eleventh Ave., the sexy glass building on the Hudson designed by starchitect Jean Nouvel.

Several sources told The Post that the former “Frasier” star, who’s in the midst of divorce proceedings, was “adamant” that the deal be kept deep under wraps. Everyone involved had to sign top-secret confidentiality agreements to keep his wife from finding out.

Here’s a photo of 100 Eleventh Avenue under construction.  This is where all of Frazier’s “upgrade yous” will be in effect: 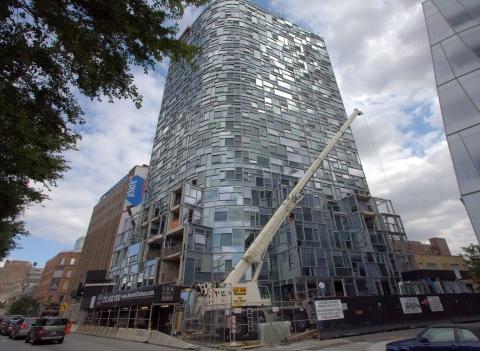 So what’s a four-bedroom shot at your Beverly Hills ex go for these days?  According to sources around 6.5 million bucks.  It may seem a little callous on Kelsey’s part but he is going to need the added space being that young Kayte is pregnant with his love child.

Where’s a good shrink like Frazier when you need one?