Johnny Manziel, the Cleveland Browns’ second-string quarterback best known for his college football heroics and general partying ways, was caught in something of an interesting situation at an Austin nightclub this weekend.

Below is the photo someone snapped of Manziel rolling a bill–in front of a mirror, no less–in the Austin nightclub where he was spotted tending bar: 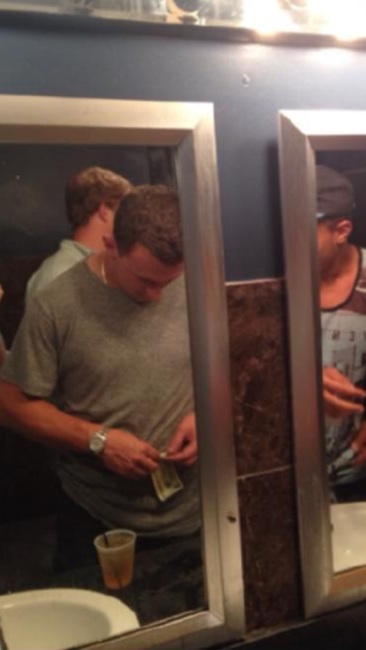 It’s worth pointing out that no drugs are visible in the photo. It’s also worth pointing out that it’s hard to think of reasons to roll up dollar bills that don’t involve something illicit. Was he making the money as small as possible so he could palm it and give it as a surreptitious tip? Did he get sick of carrying it around in his wallet and want to convert it to handy pocket size?

Perhaps the whole thing was a practical joke, or some other non-issue.

Still, by this point, Manziel’s antics have to be at least a little bit alarming for the Cleveland Browns.

Since being drafted in May, the former Texas A&M standout has sprayed champagne around a Las Vegas nightclub, been seen gallivanting around Austin quaffing the stuff openly, and shouted an F-bomb into a pretend phone made of a stack of money.

He was also present at a party at Justin Bieber’s house when the police were called in response to a noise violation.

And it’s worth further pointing out that the latest incriminating photo of Manziel surfaced the same weekend that his Browns teammate Josh Gordon was arrested for drunk driving.

Steve Martin is a first-time dad at age 67