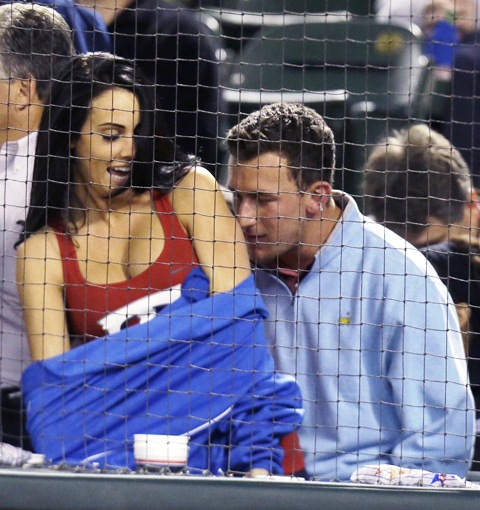 No-the hits to his reputation won’t stop. After a noisy offseason during which the former Johnny Football spent more time with Justin Bieber and engaged in suspicious bathroom activities than he did with the Browns’ playbook, Manziel’s had a pretty quiet NFL season so far.

That changed this past Sunday, after the Browns’ victory over the Falcons of Atlanta, when a fan at Manziel’s hotel asked for a hug and got a punch in the mouth instead.

According to CleveScene.com-and the police report-what happened was initially pretty benign. A Browns fan named Chris Gonos had been partying at The 9, a luxury hotel in downtown Cleveland and the home of Manziel (along with several other high-profile athletes).

When Gonos saw Manziel return following the game, he had to share the love: “I’m the biggest Browns fan ever,” Gonos said, as he approached the entourage with neither weapons nor backup, “I love you, I want to give you a hug.”

Sounds like pretty standard drunken fan appreciation, right? Except that the entourage didn’t see it like that. Gonos was punched in the face, and given a “swollen lip, [swollen] right eye, [and a] red face.”

The security guard who tried to intervene? Manziel’s crew punched him, too.

I got a bruised hip and a bruised elbow, and somebody hit me in the back of the head, too. My brother saw what was going on and he ran he tackled Johhny Manziel — I guess he got the sack and the fumble. He tackled him, yeah, I’m talking about he speared him all the way to the back wall. I was cornered; I was by myself and Johnny Manziel and like three or four of his buddies were all coming at me. (My brother) just came to help me out, and I guess Johnny sucker punched him while the security guard was holding him. It should be all on video.

So far, no charges have been filed. It sounds more like a case of an energetic (and probably drunk fan) catching bodyguards off-guard than it does anything to do with malicious intent on either side.

Interesting side note to this story? Last year, Gonos and two of his family members were found guilty of “conspiracy to structure financial transactions to evade filing currency transaction reports.” Or embezzlement, would be another word for it.

Probably the cases are unrelated.