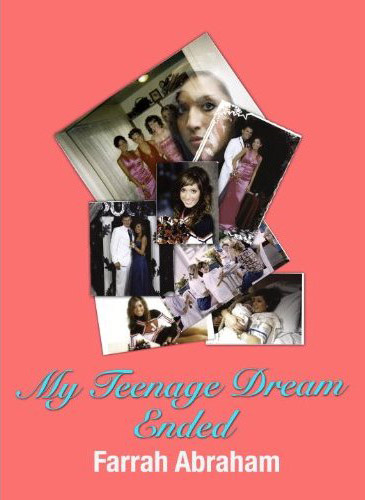 Teen Mom star Farrah Abraham revealed back in August that she was going to be releasing a book in 2012. The book is titled My Teenage Dream Ended and according to Farrah, is “aimed to help young teens and parents learn from my life experiences.”

When we first did a post about the book there was no cover yet, but the amazon listing has now been updated with the artwork above. I’m usually the first to give celebrities (especially these young teen moms) the benefit of the doubt on things, but that’s pretty bad. It’s a bit unprofessional looking without being charming. (It kind of looks like a junior high graphic design project to be honest.)

I understand what the cover is trying to convey with the numerous photos of Farrah’s high school life prior to becoming pregnant (and one after giving birth), a life that was altered dramatically when Farrah found out she was pregnant with Sophia. But it’s a really bad collage all mashed together in the center, creating a blob of images that visually seems to shrink in on itself. If she was going to go with the collage idea they should have added more photos and zoomed in where the entire cover is filled, with the text over top of that.

I won’t even begin to address the colors and the fonts.

This book has the potential be hugely successful, and it’s a real shame that MTV Press (the publisher listed on amazon) didn’t step it up on the cover! And what’s really odd to me is that Farrah has a lot of modeling experience so why wouldn’t they just feature her picture on the cover? I did a fun fake cover when I first posted about the book, but it doesn’t have to be quite as avant garde as that. Heck, they could have just contact photographer JAye Ott and gone with one of his photos of Farrah from “The Lost Photo Shoot” taken not too long after Sophia was born. That seems fitting don’t you think? 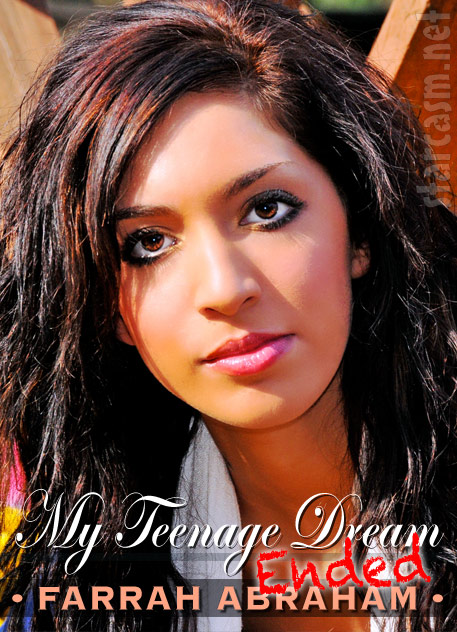 That’s a bit too busy, and the exaggerated “Ended” is a little over the top (left over from the previous book cover I did), but you get the idea. This cover needs to really jump off actual and virtual book shelves! And Farrah’s face needs to be larger so people can actually recognize her!

The book doesn’t publish until April of 2012 so maybe they still have time to make some changes on the cover. That being said, congrats again to Farrah Abraham for getting the book deal – and I do really look forward to reading what all she has to say!