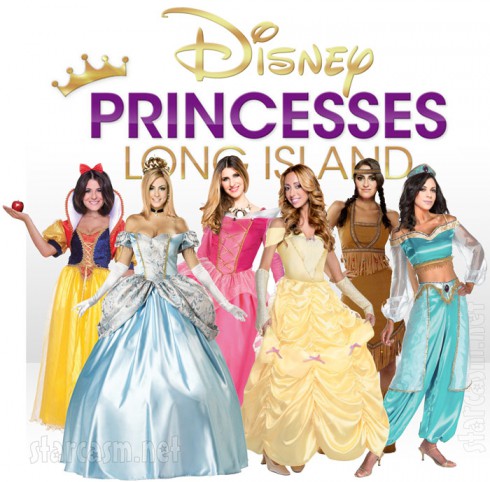 Bravo’s latest drama-packed reality show Princesses: Long Island features six women from affluent areas of Long Island “who live pampered lifestyles in the comfort of their parents’ homes and at the expense of their bank accounts.” Throw in a few Prince Charmings, a couple singing dwarves, and perhaps a jokester Genie and I think you’ve got an Avengers-inspired ensemble Disney movie for the ages! In honor of that concept I’ve dressed up all the PLI gals as Disney princesses.

From left to right we have Ashlee “Snow” White with the symbolic City That Never Sleeps in her hand, Casey Cohenderella, Chanel (Coco/Sleeping Beauty) Omaurora, Amanda Belletoncini, Ericahontas Gimbel and Joey Jasmine. (Those were for you Andy Cohen!)

Just in case you didn’t know, the actual names of the cast of Princesses: Long Island are Ashlee White, Casey Cohen, Chanel (Coco) Omari, Amanda Bertoncini, Erica Gimbel and Joey Lauren. You can catch them acting out their happily ever afters in the MAgic Kingdom of New York City every Sunday night at 9/8c on Bravo!