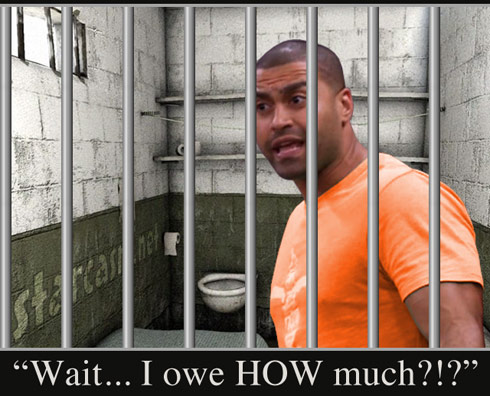 “I owe, I owe, it’s off to prison I go…” That’s the song that The Real Housewives of Atlanta‘s Apollo Nida is singing after a judge ordered that he pay close to $2 million ($1,948,214.85 to be exact) in restitution to the victims of his numerous mail, bank and wire fraud schemes — this being on top of the eight-year prison sentence. In Phaedra math, that’s 3.8 million belly bands y’all!!! And if you’re better versed in Apollo math, that is roughly 118,824 copies of the Phine Body Volume 1 workout DVD, or 126,751 copies of the Phine Body Volume 2 workout DVD!

The order from the court also reveals that upon release Apollo will have to pay at least $250 a month “plus 25% of gross monthly income in excess of $2,300” until the huge debt is paid off. So, if Apollo somehow lands a job making $50,000 a year after being released, that means he will have to pay approximately $716.67 a month. That would mean he would be all paid up after a little more than 226-and-a-half years.

Here’s an excerpt from the court order with the details, including everyone Apollo owes money to:

Based on the consent motion of the parties and the court’s review of the record in this matter, the court directs defendant Apollo E. Nida to pay restitution to the Clerk of Court I the total amount of $1,948.214.85. This amount is due and payable immediately. Restitution is payable jointly and severally with the restitution order to be entered in United States v. Gayla O’Neal St. Julien,l:13-CR-00403-CAP.

For any unpaid balance, the court imposes the following payment schedule: During any period of incarceration, payment of any criminal monetary debt remains due and may be made in accordance with the Inmate Financial Responsibility Program(IFRP). Any portion of the criminal monetary debt that remains unpaid at the time of defendant Apollo E. Nida’s release from imprisonment shall be paid at the monthly rate of at least $250.00 plus 25% of gross monthly income in excess of $2,300. The payment schedule shall not preclude enforcement of the restitution judgment by the United States Attorney pursuant to 18 U.S.C. §§ 3613 and 3664.

Restitution shall be distributed pro rata to defendant Apollo E. Nida’s victims by the Clerk of Court in accordance with the individual loss amounts listed herein:

On the bright side, Apollo has at least seven years or so to come up with some sort of scheme to pay everybody back.

Meanwhile, Apollo has yet to turn himself in to authorities, so he is still enjoying his last moments of freedom. Among his pre-incarceration activities is taking to Twitter to find someone to ride shotgun with him to the Big House and to complain about why he doesn’t seem to be getting a lot of support for being found guilty of fraud and being sentenced to nearly a decade behind bars: 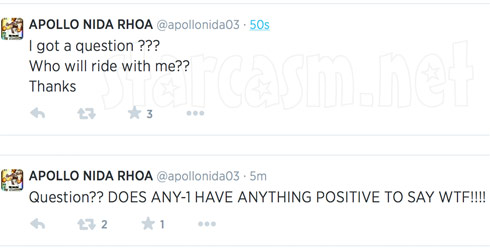 It’s also interesting to note that Apollo has essentially removed all images and references to his wife Phaedra Parks from his Twitter profile, except for the Phine Body DVD images and links. Also, Phaedra’s Twitter account has remained silent since July 6th, two days before Apollo’s sentencing on July 8. If she had tweeted something over the past week, it probably should have been something like, “Everybody knows that you shouldn’t try to keep a large stone from sinking!”

MUG SHOT Michael Lohan vs. Kate Major: Was it oral sex or the rhythm method?