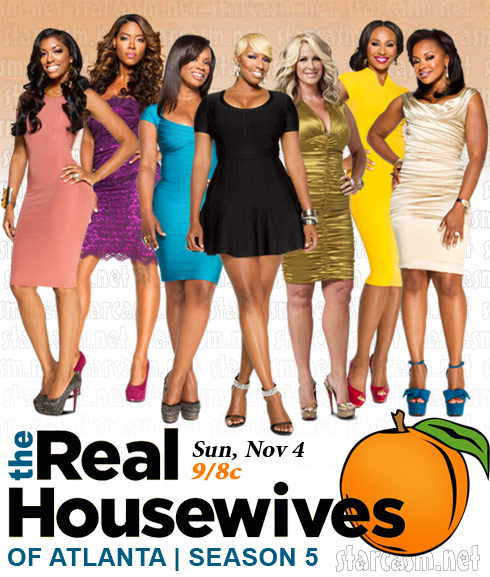 Ever since the announcement was made that original Real Housewives of Atlanta cast member Sheree Whitfield would not be back for the fifth season, the internet has been awash in speculation and rumors about who would be replacing her. Earlier tonight Bravo cleared up all the mystery with an official announcement of two new cast members as well as a Season 5 premiere date of November 4!

Joining show vets NeNe Leakes, Kim Zolciak, Kandi Burruss, Phaedra Parks and Cynthia Bailey will be brand new Real Housewives of Atlanta cast members Porshe Stewart and Kenya Moore. Both ladies are being presented as “official” housewives, and not just “friends of the housewives,” as Marlo Hampton was last season.

From the Bravo announcement:

You may already know Kenya, who was crowned Miss USA in 1993 (and came in fifth in the Miss Universe competition), and has also done her fair share of acting and business in Hollywood. As for Porsha, she and Kim immediately have something in common in that they’re both married to football players. Her man happens to be Kordell Stewart, and aside from her music aspirations, she is the granddaughter of Civil rights leader and philanthropist, Rev. Hosea Williams.

Along with the new RHOA announcement, Bravo also released the official cast and premiere date for The Real Housewives of Beverly Hills Season 5. And RHOBH fans were given an additional treat in the form of a preview trailer for the new season! RHOA fans were not so lucky. Yet.

What kind of plastic surgery has Kim Zolciak had?