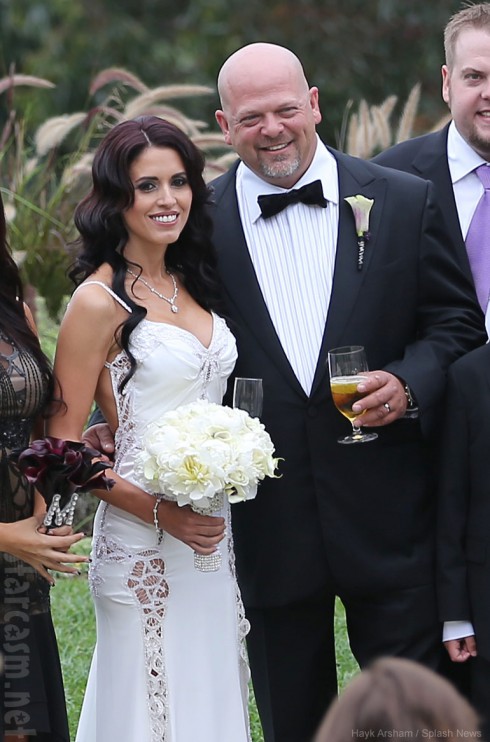 World Famous Gold & Silver Pawn Shop co-owner (and star of History’s reality series Pawns Stars) Rick Harrison married DeAnna Burditt Sunday at the Ritz Carlton in Laguna Niguel, California. Rick looked quite suave in his black tux, but he was eclipsed by his bride DeAnna, who looked absolutely stunning in a full-length form-fitting backless white gown with cutouts down the side! 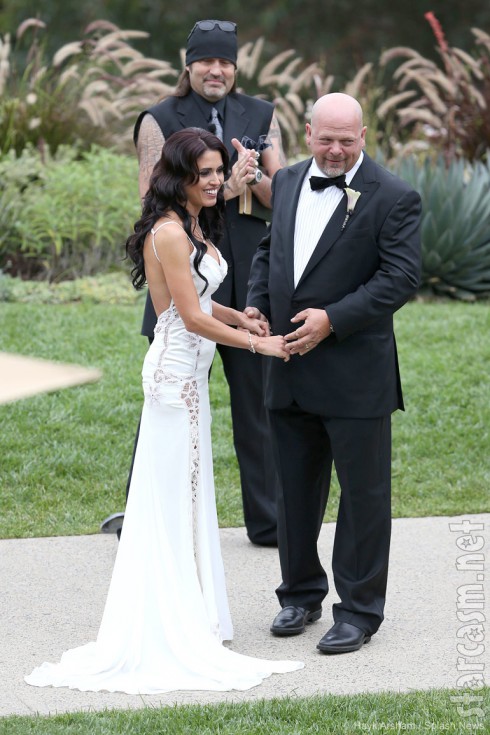 Also looking their best were Rick’s Pawn Stars cohorts, including his son Corey, his pops Richard “Old Man” Harrison (complete with panama hat), and of course Austin “Chumlee” Russell, who managed to maintain that casual Chumlee flair as ring bearer (how was that not a bad call?!?) with a pair of sneakers and shades — to go along with his white Chumlee butler gloves: 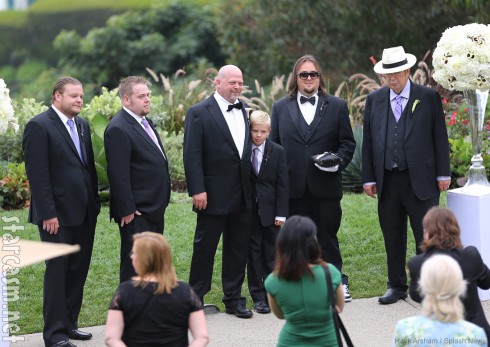 In addition to Corey, Chumlee, and the Old Man, Rick’s sons Adam and Jake were also in the ceremony.

And speaking of “also in the ceremony,” History channel reality show fans might recognize the minister in the second photo from the top as none other than Danny Koker from Counting Cars, who was reportedly ordained just prior to the wedding just so he could conduct the ceremony!

Rick Harrison, 47, proposed to DeAnna Burditt, 36, on Valentine’s Day, 2012 at the same restaurant at which they had their first date.

As far as honeymoon plans, Rick told Norm Clarke of Las Vegas Review-Journal, “I wanted to take her to the south of France. Or Fiji.” But DeAnna wanted something a little less extravagant. “She said, ‘Let’s just go camping,’” Rick recalled. He wouldn’t reveal specifics (obviously), Rick merely said their honeymoon camping trip would be “somewhere in the West.”

Congratulations to Rick and DeAnna! There is no word if fans will get to see footage of the wedding on the show, but with all the “boys” in tuxes, I just don’t see how they wouldn’t have had cameras rolling for that!

UPDATE – According to People magazine, DeAnna’s gown was made by designer Inbal Dror and was shipped in from London’s Morgan–Davies Bridal. The magazine added that “Following the nuptials, guests were entertained by glam rock band Steel Panther and they even went home with a souvenir: A bobblehead of the happy couple in their wedding attire.” I wonder how much you could get for a Rick Harrison and DeAnna Burditt bride and groom bobblehead dolls at World Famous Gold & Silver Pawn Shop?