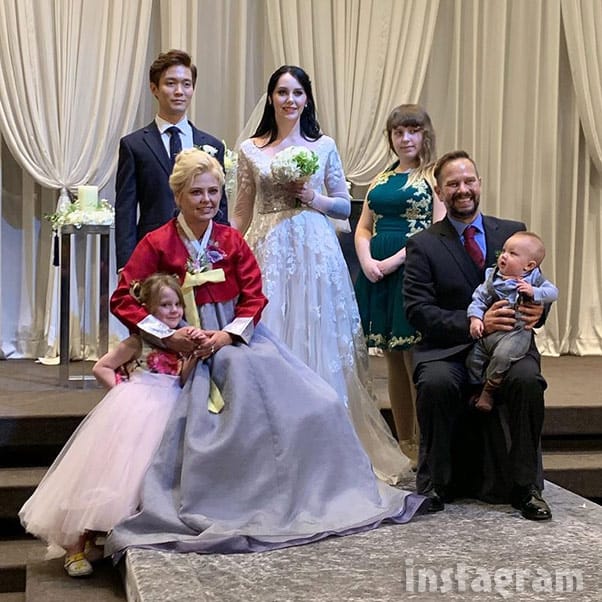 90 Day Fiance: The Other Way couple Deavan and Jihoon were officially married soon after she arrived in South Korea, as viewers of the show are well aware. Deavan revealed that she didn’t want to have a formal ceremony unless her family was able to attend, and that formal ceremony was this weekend! And we have a leaked wedding family photo!

In the picture (above) you can see the bride and the groom looking wedding-cake-topper perfect! Jihoon is super dapper in his suit, and Deavan is stunning in her white floral wedding gown.

Surrounding the bride and groom are Deavan’s mother Elicia and dad Steve as well as Deavan’s daughter Drascilla, son Taeyang and sister Raven.

Unfortunately, we don’t have many details about the ceremony. We do know that there was a TLC camera crew filming Deavan and Jihoon though! @FraudedByTLC shared the wedding photo as well as another behind-the-scenes shot of the crew at work:

It’s unclear if TLC plans to feature the couple on another season of The Other Way, or if Deavan and Jihoon will be joining 90 Day Fiance: Happily Ever After.

Either way, I can’t wait to see more of the couple — especially after being reunited with break-out star Drascilla! Congratulations again to the entire family!