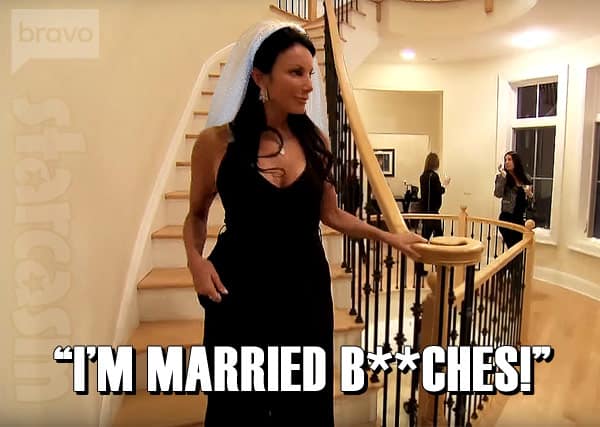 One day after The Real Housewives of New Jersey OG Danielle Staub officially tied the knot in a Cinco de Mayo ceremony on a Bahamian beach, we are finally getting to see the very first photos from the ceremony — including Danielle wearing her show-Staubing Pnina Tornai wedding gown!

The majority of the photos have surfaced on social media and look to have been taken by attendees — as such, the quality leaves a little to be desired. Even with the blurriness and low resolution, however, the ladies’ Bahama glama shines through! First, here is the bride Danielle riding with some of her wedding party, including her daughter Christine as well as RHONJ co-stars Melissa Gorga and Margaret Josephs:

And here is Matron of Honor Teresa Giudice looking fabulicious:

But let’s back to the bride! Here are some more photos and video of Danielle Staub in her wedding gown, including a photo of her first kiss with new husband Marty Caffery:

And here is a video from the wedding party after the ceremony in which you can see Teresa Giudice and her brother Joe Gorga cuttin’ the rug together!

How fun does Danielle’s after party look? You can see Teresa and Joe dancing! Here is an EXCLUSIVE video from last night! #RHONJ ?? pic.twitter.com/FYBWjpqiJD

Here’s a repeat of the first photo in this post featuring the wedding party, but it also has a great Melissa Gorga selfie in her her bridesmaid dress, so it has to be included:

Congratulations again to Danielle and Marty! It looked like quite the joyful shindig, and we can’t wait to see it all on The Real Housewives of New Jersey Season 9!