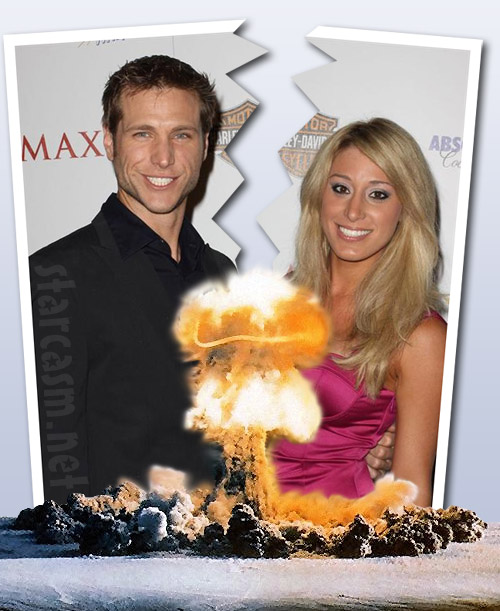 Things are getting real messy for Jake Pavelka and Vienna Girardi following the announcement of their recent split! In an interview with Star magazine Vienna claims that Jake never wanted to actually get married, was obsessed with pursuing a career in acting and was never “intimate” with her. The latter claim has since sparked rumors that perhaps Jake Pavelka is gay.

Needless to say, the article angered Pavelka, who says selling the story to Star was crossing the line.

Never ones to avoid a little publicity, the acrimonious couple have reunited for an Us Magazine interview with Bachelor/Bachelorette host Chris Harrison. According to sources the 2-hour interview was less than amicable with rumors floating around that Pavelka raised a fist at Girardi during the Q & A. (No roses here folks – just thorns!) A Bachelor rep denied these rumors.

“Former The Bachelor participants Jake and Vienna taped an interview last night. As this was the first time the two had seen one another since their recent breakup, the atmosphere was emotionally charged. However, and contrary to reports that have surfaced about the interview, at no time was anyone ever physically in harm’s way, nor was anyone ever threatened with physical violence.”

When an official rep has to come out and deny violence rumors you KNOW the interview is going to be good!  The source for Us went on to add:

“At one point — after Girardi kept continually cutting him off — Pavelka stood up. But the insider says he simply asked, ‘Will you just let me finish?'”

“He couldn’t get a word out — it was very reflective of their relationship,” says the source, who adds that host Chris Harrison often had to tell Girardi, “Vienna, let him talk.  Vienna was on the defense,” the source said. “She was trying to play victim.”

Girardi ended up storming off the set in tears.

“Jake has lost all respect for her,” the source tells Us. “She crossed the line when she sold their relationship to Star.”

Get your DVR’s ready, this explosive interview is set to air on Monday July 5th during that night’s broadcast of the Bachelorette.

Want to get caught up on the latest in the Jake Pavelka Vienna Girardi debacle? Check out Radar Online’s article with one of Jake’s brosephs who, in true wing-man fashion, states his pilot buddy isn’t gay. (Not that there’s anything wrong with that) Back before the separation we reported the news that Girardi had hungry eyes for Rick Fox thanks to an Eliza Dushku “cut you” threat on Twitter, and our own Bachelor /Bachelorette in-house expert (and reality show conspiracy theorist) Asa Hawks has considered the possibility of Ali Fedotowski reuniting with Jake Pavelka in the season finale of The Bachelorette.

Where does Vienna Girardi work now? She has a marketing job helping cancer patients

Did Teen Mom Kailyn Lowry and Jordan Wenner break up?