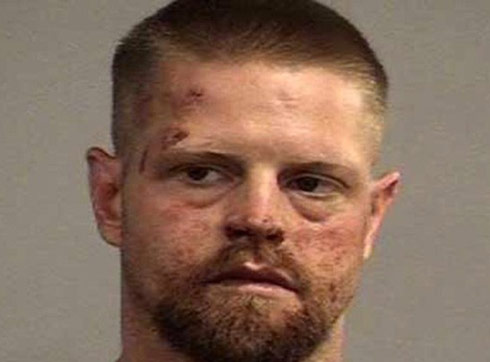 A probable cause statement obtained by WAVE says that Joseph Oberhansley allegedly stabbed Tammy Jo Blanton to death before eating a portion of her brains, heart and lungs.

Blanton called police on September 11 saying that Oberhansley, 33, was attempting to force himself inside her home. The authorities sent him away but they returned later to check on her at the urging of her coworkers.

When the police got back to the residence they discovered Blanton’s bloodied body in the bathtub with a portion of her skull cut out. The report added that, “Oberhansley further admitted to cooking a section of her brain and eating it.”

In 2000, Oberhansley pled guilty to manslaughter for killing his girlfriend and attempted murder for shooting his own mother. Via The Desert News:

Apparently without being provoked, Oberhansley walked into the house, pulled a gun out of a bag and shot his girlfriend, Sabrina Elder, who just days before had given birth to the couple’s child. After several shots, one fatal bullet hit her in the head. Oberhansley, 18, then shot and wounded his mother, Brenda Lee Self, before turning the gun on himself (in a failed suicide attempt).

Oberhansley was originally charged with murder, a first-degree felony, but prosecutors agreed to the plea bargain after Oberhansley’s mother and grandmother, both eyewitnesses to the crime, and other family members were hesitant to cooperate with the investigation.

Oberhansley was released on parole in 2012 but he got himself in trouble last year for choking a fellow bar patron and resisting arrest – he was reportedly naked at the time of these crimes. It was Blanton that paid the $1,000 bond to secure his release.

Clark County Prosecutor Jeremy Mull had requested a higher bond but he said that another prosecutor, who has since resigned, lowered the bond – allowing for Oberhansley’s freedom. “I felt he was dangerous, I was right. And he was released without my knowledge. That devastates me,” Mull told WAVE.