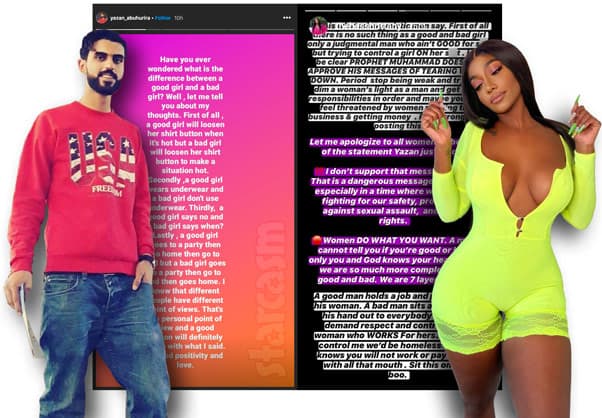 On the current season of 90 Day Fiance: The Other Way, Brittany and Yazan have been fighting non-stop since the moment she stepped off the airplane in Jordan. That hostility has continued months later on social media as the two continue to call each other out via Instagram.

The latest exchange between the two was sparked by Yazan’s post explaining the difference between good girls and bad girls, which is essentially that “bad girls” try to be sexy and have sex while “good girls” are only sexy when its unintentional, and they don’t do the boom boom.

Here are Yazan’s insights into gender morality in regards to women:

Have you ever wondered what is the difference between a good girl and a bad girl? Well, let me tell you about my thoughts.

Secondly, a good girl wears underwear and a bad girl don’t use underwear. 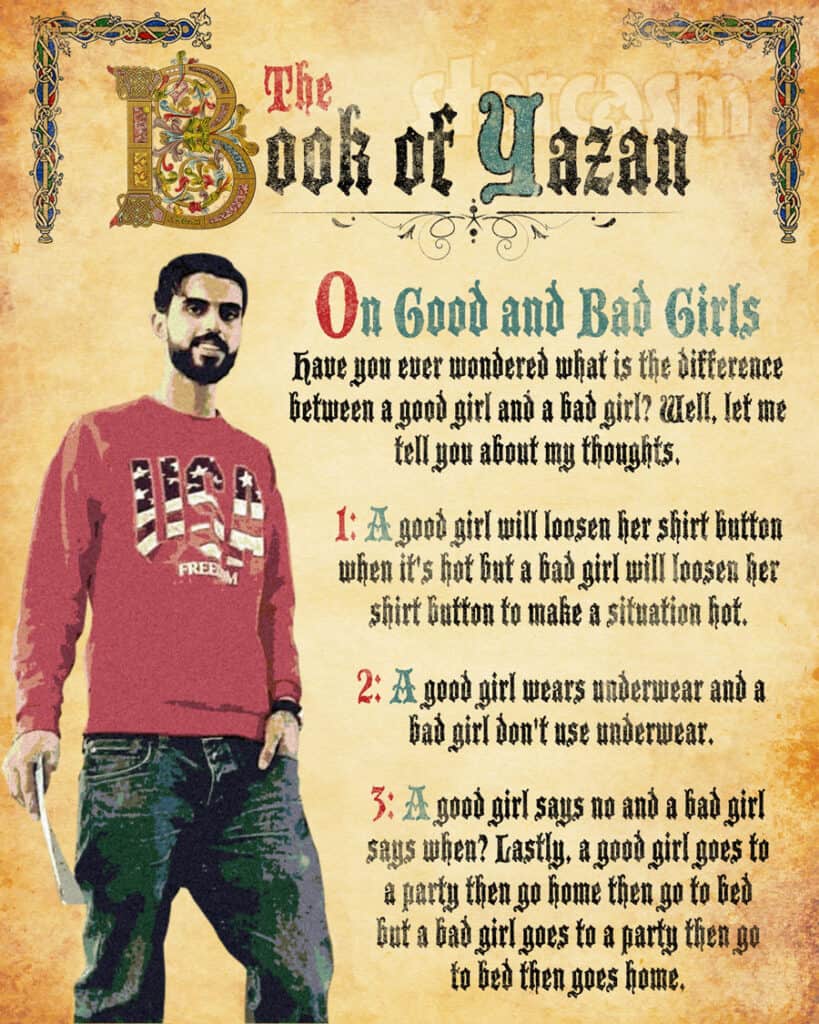 At the end of his post, Yazan broadened his judgement to all people. “That’s my personal point of view and a good person will definitely agree with what I said,” he wrote, before adding a seemingly contradictory message: “Spread positivity and love.”

He followed up with a message about Muslim women not being “cheap” in regards to who can afford them: 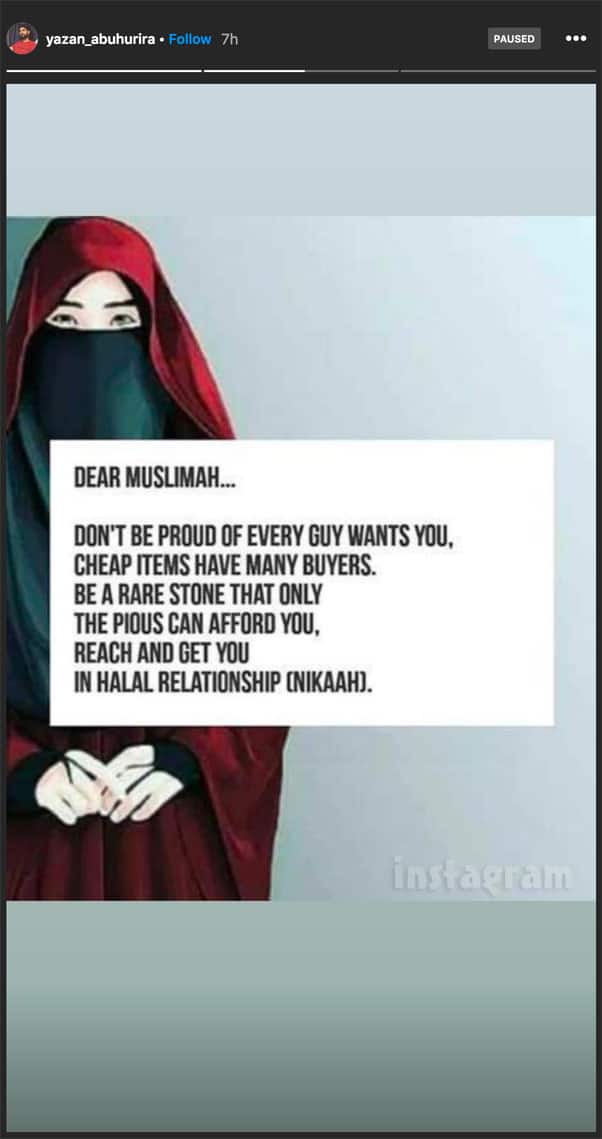 The Jordanian reality star would later clarify in another Instagram story text post that his insights weren’t directed at anyone (***COUGH*** Brittany ***COUGH***) in particular. “I want to clarify something. My previous stories is not about any specific person,” he wrote. “I was just talking about something in general.”

Brittany caught wind of Yazan’s preachings, and of course she had a few things to say about them. She shared a screen cap of his initial post on her Instagram account and added the following commentary:

This is what misogynistic men say. First of all there is no such thing as a good and bad girl only a judgmental man who ain’t GOOD for sh*t but trying to control a girl ON her sh*t. Let’s be clear PROPHET MUHAMMAD DOES NOT APPROVE HIS MESSAGES OF TEARING WOMEN DOWN. Period. Stop being weak and trying to dim a woman’s light as a man and get YOUR responsibilities in order and maybe you won’t feel threatened by women minding their business & getting money. F**k wrong w you posting this.

Let me apologize to all women on behalf of the statement Yazan just made.

❗️❗️ I don’t support that message at all. That is a dangerous message to put out especially in a time where woman are fighting for our safety, protection against sexual assault, and equal rights.

🛑 Women DO WHAT YOU WANT. A man cannot tell you if you’re good or bad only you and God knows your heart. And we are so much more complex than good and bad. We are 7 layer cakes!

A good man holds a job and provides for his woman. A bad man sits at home with his hand out to everybody, trying to demand respect and control over a woman who WORKS for hers. If I let you control me we’d be homeless cus lord knows you will not work or pay one bill with all that mouth. Sit this one out boo.

I think most everyone will agree that Brittany clearly won this round. But was this even a real fight, or just Yazan and Brittany playing up the drama for attention?

Many viewers have been reacting to Yazan and Brittany’s story line on the show with disbelief, and that includes myself. There’s so much about their relationship that isn’t believable, and just as Brittany said in her reactions above, she is all about working for hers and getting money. She has been pushing hard for exposure as an “influencer, model, actress, rapper” for years, so it seems obvious that she would be willing to go on a popular reality show that required her to stretch the truth a bit.

Speaking of Brittany working for hers, none of Yazan’s drama about her being a “bad girl” makes ANY sense whatsoever. He met her online because she was basically twerking in a thong for followers. I agree with Brittany in that if a woman wants to literally shake her moneymakers, then more power to her! (Or him for that matter.) But why the heck is Yazan clutching his Misbaha about Brittany?! It wasn’t like he met her on a “Good Girls Who Wear Panties” dating website. And if she actually did visit him in Jordan before, I do not believe for one second that there was no bad girl boom boom going on.

#90DayFiance #TheOtherWay Brittany Banks may be familiar to some fans already. The self-described "social media influencer, model, actress, rapper" has 320k IG followers and 2 OnlyFans accounts! We've got links, videos, and even a rap song sample for you! https://t.co/AkAIB30AQN

Personally, I don’t buy their story at all. I think Brittany is very smart as far as knowing what producers wanted, and she pitched a story that they simply could not resist. A young black woman from Florida who twerks on Instagram and raps who is flying to Jordan to be with her Muslim fiance. She was also willing to go on camera wearing braces and talk about having 70-something-year-old sugar daddies. Then, she added the irresistible “big secret” cherry on top of still being married to a guy that was deported! (In case you missed it, Brittany filed for divorce in September and it actually went through in February.)

As far as their recent online drama (including Brittany previously trashing Yazan for being his definition of a bad boy), that could be a continuance of their on-screen volatility, or it could actually be legit. Even if they conspired to fake their relationship for the show, they could have still had a falling out. It seems like a mixture of both to me.

The 90 Day Fiance franchise has a history of stretching the truth a bit, and despite my aversion to the fakeness, I’m still a fan of the shows. However, there are times when the apparent fakeness makes it difficult to enjoy watching, and that is certainly the case with Yazan and Brittany for me. Their conflicts just don’t make any sense and seem VERY heavy handed. Brittany did a series of YouTube videos with skit comedian TPindell in which they role played different cultures, and her story line with Yazan this season kind of reminds me of those — just a little less ridiculous.

To be honest, when I’m watching them on the show I can’t help but think I’m watching a Sacha Baron Cohen prank. Am I the only one?

90 Day Fiance: The Other Way spoiler: Tiffany is pregnant! PHOTOS