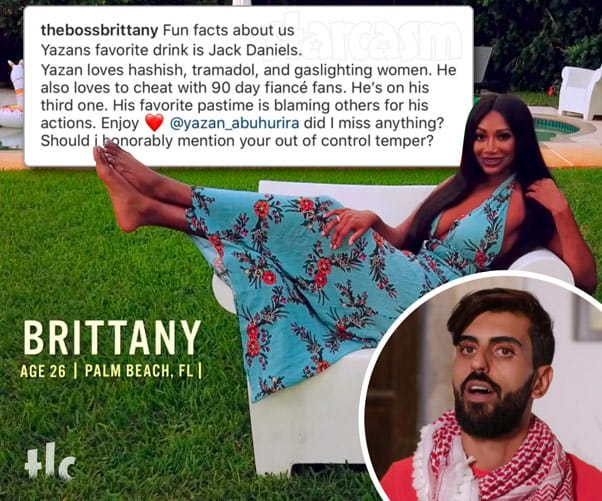 We’re only a few episodes into the new season of 90 Day Fiance: The Other Way and we already have a clear front runner for the coveted “Most Dramatic Couple” award! On Monday night’s episode, Brittany Banks and Yazan Abo Horira got into a HUGE fight when she arrived in Jordan thanks to her bringing some booze along in her carry-on and hugging members of production. That energy spilled over onto Instagram today when Brittany’s account shared a post BLASTING Yazan for being hypocritical with his judgment.

“Fun facts about us,” the caption began for a TLC promo photo of Brittany and Yazan, “Yazan’s favorite drink is Jack Daniels. Yazan loves hashish, Tramadol, and gaslighting women.”

The Yazan blasting continued. “He also loves to cheat with 90 Day Fiancé fans. He’s on his third one.” (This accusation is in line with recent reports on social media alleging that Yazan was slippin’ and slidin’ in some DMs.)

“His favorite pastime is blaming others for his actions,” the post continues. “Enjoy ❤️ @yazan_abuhurira did I miss anything? Should I honorably mention your out of control temper?”

In the comments section, someone asked who was running Yazan’s Instagram account because his English wasn’t very good. “His third girlfriend he chose from his fan base,” Britttany replied.

Or was it Brittany?

The post was later deleted and Brittany returned to share a brief video clip stroking her hair that she captioned by writing: “I was hacked or whatever.” A commenter was impressed with how quickly she was able to get her account back after being hacked. “2nd time getting hacked,” Brittany replied. “I have them on speed dial.”

Brittany’s flippant caption has the majority of fans online seriously doubting that her account was actually hacked. The general consensus seems to be that Brittany did make the post and she probably deleted it after getting scolded by producers.

Meanwhile, Yazan appears to be trying to do some damage control. Here’s a reddit post with some alleged DMs between Yazan and a 90 Day Fiance Instagrammer who shared Brittany’s “hacked” post:

Yazan is messaging IG meme accounts, pleading with them to remove the posts about Brittany’s now deleted posts about him. (He has no idea what kind of scrutiny awaits him😂😂) from r/90DayFiance

For those of you conspiracy theorist 90 Day Fiance fans out there, I will wrap up this post with quite a whopper of an accusation from a Lipstick Alley poster. “OMG this show is so fu***ing fake,” the post from June 4 begins. “Yazan fine ass lives in Florida he works at a damn Bravo supermart in the fish and meat department.” The poster adds that Yazan’s family “lived in Miami last I heard” and Brittany and Yazan have been dating for two years!

Another commenter replied and asked for proof. “I’m heading to that store today and will ask about him cause last time I seen them was last year at carnival,” the original poster wrote.

The op returned a couple days later with an update. “[Yazan’s] family got deported, but he’s still in Florida. He goes back and visits to help.”

I checked into Brittany for our previous post about her divorce, and I didn’t see anything that would indicate that Yazan has been in living in Florida. I just checked court records for him in a couple counties, and nothing turned up there either. This isn’t any sort of proof that Yazan doesn’t live in The Sunshine State, but without any actual evidence to prove that he does, I’m not going to buy into this one. There’s enough about Brittany and Yazan’s story line that seems hard to believe already.

To keep up with Brittany and Yazan’s seemingly ill-fated international romance, be sure to tune in for new episodes of 90 Day Fiance: The Other Way airing Monday nights at 9/8cc on TLC!

THE OTHER WAY Is Brittany divorced or still married? Was she already divorced when she filmed?