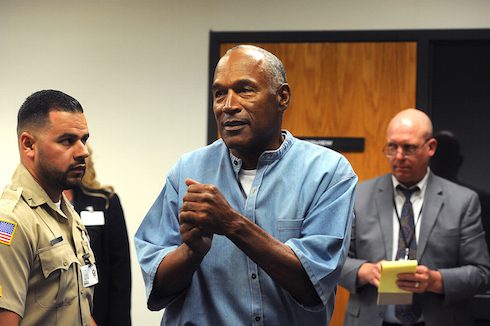 THE BLEMISH – OJ Simpson managed to keep his story straight for 24 years. That is, until he got carried away with a hypothetical discussion of Nicole Simpson and Ron Goldman’s murders during a TV interview, and then pretty much OJ confessed to killing both of them. As anyone who’s ever taught a freshman lit class will tell you, unreliable narrators can be tricky

CELEBITCHY – Speaking of interviews doing their subjects no favors: This story about Colin Firth’s wife Livia having an affair with Italian and future stalker Marco Branaccia is as messy (and bananas) as it was unexpected. And Marco, who has “a history of threatening behavior towards ex-lovers,” isn’t doing himself many favors with this very high-profile interview

JEZEBEL – Today’s trifeca of high-profile interview fails is complete: I’m all for giving billionaires with no experience a chance to do their new jobs before castigating them endlessly, but Betsy DeVos is so inept she makes Ben Carson look good. For proof, suffer through her 60 Minutes chat with Lesley Stah

VOX – The creators of Stranger Things have been accused of verbally abusing women on the set of the show. Netflix’s 48-hour investigation found nothing. So we’ll probably never hear about this again

THE ASHLEY’S REALITY ROUNDUP – Contestants Ashley Iaconetti and Kevin Wendt have split just a few months after “taking home the gold” The Bachelor: Winter Games. If you extend the Winter Olympics metaphor far enough, does this actually make them a Russian couple disqualified for doping?

REALITY TEA – Aviva “Leg Toss” Drescher says she would go back to The Real Housewives of New York “if they needed somebody” and “if [she] worked in the mix.” Commence eyepatch jokes

VERY SMART BROTHAS – I don’t know why we don’t tip fast food workers either. But I do know that Mr. Pink would like a word