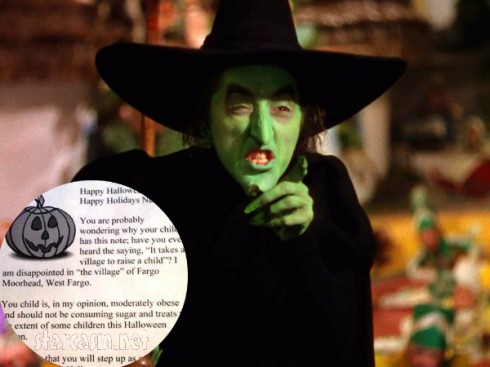 One North Dakota woman is taking the “evil witch” Halloween act a little too far by giving trick-or-treaters she deems overweight a sealed letter criticizing their parents’ decisions instead of candy.

“I just want to send a message to the parents of kids that are really overweight,” the woman told Fargo-Moorhead’s Y94 radio station. “I think it’s just really irresponsible of parents to send them out looking for free candy just ’cause all the other kids are doing it.”

Although the woman would only identify herself as Cheryl, she seemed proud of her decision.

“You child is, in my opinion, moderately obese and should not be consuming sugar and treats to the extent of some children this Halloween season,” she said in the letter, which she emailed to Y94 after her interview. “My hope is that you will step up as a parent and ration candy this Halloween and not allow your child to continue these unhealthy eating habits.” 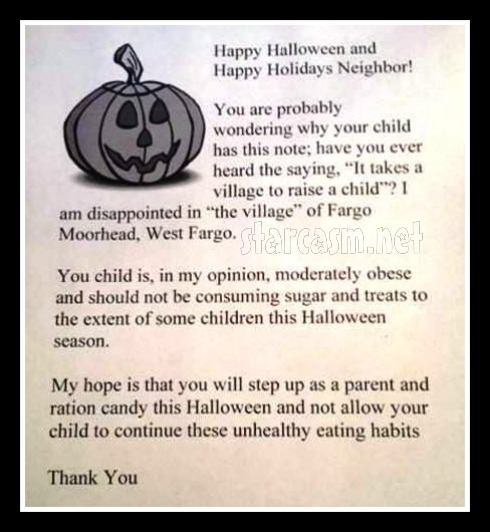 The overwhelming reaction to Cheryl’s decision is that she is out of line.

“It’s just that kind of thing that for some kids, if they’re vulnerable, might trigger major problems,” a North Dakota State professor of clinical psychology told Valley News Live. “Even if a child is overweight, they might be very healthy because of what they eat and how they exercise. It’s ineffective anyway because it’s not likely to help the kid.”

However, Cheryl told Y94 it isn’t her intention to become the neighborhood “mean lady.” Instead, she hopes the children will have enjoyable Halloweens and their parents learn something in the process.

“I think it’s really irresponsible for parents to send them out looking for free candy just because all the other kids are doing it,” Cheryl said.

“I think it’s a tough love letter,” the Pennsylvania-based doctor said. “Giving candy to an obese child is like giving a cigarette to a person with emphysema,” Smith says. “It is giving a drink to an alcoholic. It is giving heroin to a drug addict.”

Y94 radio host Corey “Zero” Schaffer told Fox News he intends to follow-up with Cheryl on Friday morning to see if she went through with her plans.