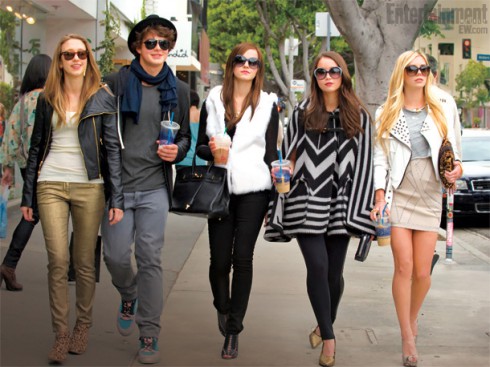 The trailer for Sofia Coppola’s movie about the infamous Bling Ring is out.

In 2008 five teenagers lifted nearly $3 million in stolen goods for the houses of celebrities like Paris Hilton, Lindsay Lohan, Audrina Patridge and Orlando Bloom. The Bling Ring, or The Burglar Bunch, as they became known in the media, was led by Rachel Lee, but the girl who got the most attention was actually on the fringes of the group: Alexis Neiers, portrayed by Emma Watson.

Neiers claimed she got in with the wrong crowd, and didn’t realize what was happening when the group robbed Orlando Bloom’s house. She was so drunk, she says, that she was throwing up in the bushes while others were taking things. The extent of Neiers involvement is still hard to tell, but she got so much attention because she, her adopted sister Tess Taylor, and her mom Andra Arlington were filmed for an E! reality show called Pretty Wild.

Footage from the show, and a compelling profile on Alexis by Vanity Fair‘s Nancy Jo Sales are rumored to be a good chunk of the inspiration for the film.

Even so, Watson tweeted that her character is not the main focus of the movie:

“I don’t really ‘star’ in the Bling Ring. I am probably 3rd/4th of the lead characters. (In case media/marketing is a bit misleading.)

The Bling Ring is set for limited release in the US June 2013.

Click here for an update on what Alexis Neiers is up to now.