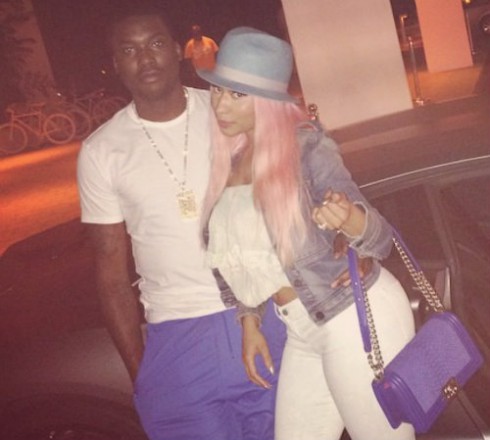 Does Nicki Minaj have an engagement ring or just some new bling? Yesterday, the singer sparked rumors she’s engaged to Meek Mill, her boyfriend of a few months, by sharing a picture of a stunning 15-carat heart-shaped diamond that’s estimated to cost upwards of $500,000. To add to the mystery, Nicki just added some emojis.

For his part, Meek just responded to someone on Twitter who said he’s lucky by simply saying “I am.” Fortunately for us, someone else did the talking for the couple by telling E! News they are really planning a wedding.

“Both Meek and Nicki have been spending amazing quality time together lately and have gotten extremely close these past few months,” the insider said. “It may seem like it all is happening very quickly but Nicki and Meek are in this 100. They truly love each other.”

In the past, Nicki made no secret of her desire to get married someday.

“I definitely will be married before I have my baby,” she told Complex Magazine last fall around the time of her fourth album release. She added she hopes all of that happens before album No. 5, saying, “No matter how much money I have I would be disappointed, as a woman, because I feel like I was put here to be a mother… By the fifth album, I will have walked down the aisle and I will at least be on baby number one, possibly baby number two.”

However, maybe we should hold up before sending her engagement gifts: There’s a chance worth considering that this could be a stunt for Nicki and Meek’s song “Buy a Heart.”