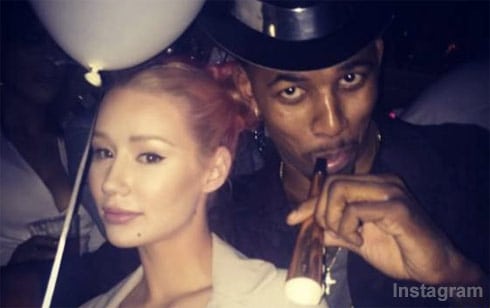 Here’s a quick recap of the strange devolution of their relationship:

— Young’s Los Angeles Lake teammate shared a video of Young bragging about having an affair on Iggy.

— Azalea forgave Young at first but stated that if she caught him in the act she would cut off a portion f his penis.

— A few weeks later, Iggy announced that the pair had split and that she would like some privacy.

— TMZ posted pics of what appeared to be Iggy tossing his stuff out of their home.

— A report surfaced in which the mother of Nick Young’s son, Keonna Green, said that she accidentally had gotten pregnant again with Nick while he was still engaged to Iggy.

— Iggy took to Twitter a couple of days ago to explain that she had not thrown things out, that she was unaware and baffled by the news that Green and Young had made a new baby and that it wasn’t the video from Young’s teammate, but security footage taken from their shared home that showed Young bringing other women in, that motivated her to call it off.

And here’s what Rose had to say about it:

“My heart goes out to you @thenewclassic. I have been through heartbreak as well so I know what ur going through. Stay strong and keep ur head up my Rosebuds and I support you and we think ur AMAZING!!! Not only beautiful but extremely talented! I remember watching ur YouTube videos a few years back thinking ‘Wow this girl is gonna be a star’ and you are!”

Let all the hate go in one ear and out the other…. Trust me I deal with just as much hate if not more. The great thing is it’s the beginning of the summer and now you can be a h*e! Lol Date a bunch of hot guys and give yourself some cool options.

Rose added, “BUT seriously if you wanted to take Nick back cuz the Love is still there… F***ing do it!!!” And F**k what the world gotta say. Muva is here for you either way sweetheart and so is so many other people that love you.”