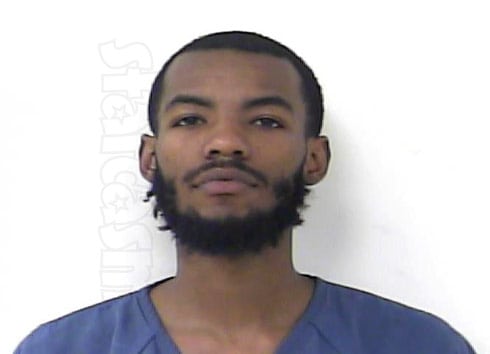 As we reported last week, Teen Mom 2 dad Devoin Austin is back in jail again in Florida after being arrested on a warrant stemming from a missed court appearance last year. Today a new mug shot photo of Devoin (and his rather robust chin broom) surfaced online, causing many to wonder if he was arrested yet again.

Nope, Devoin hasn’t been arrested again — he is merely still in custody from his previous arrest. He was transferred to a new jail facility in the county the warrant was issued in, and thus the addition to his growing mug shot collection.

Someone shared the photo with Briana on Twitter, and she shook her head with her response: “They transferred my BD. I should go visit him and ask him why the f**k he still on the wrong path in life smh.”

“Not worth your time tbh,” someone replied, to which Briana responded with: “He’s going thru it. I can see it in his eyes.”

At this point, things go a bit off the rails as another woman, who I assume is a pal of Devoin’s, comes at Briana and a full-on Twitter catfight ensues! From there, more cats join in (on both sides) and Briana’s claws come out!

Twitter fracases can be a bit chaotic and hard to follow, so I’ve tried to piece it together in a more digestible timeline for you. As it turns out, by the time I had finished the post, Briana had gone back and deleted most all of her tweets — so this post is now an important piece of pop culture history.

[NOTE: Hey Charlamagne Tha God, if you’re reading this, I think we have some candidates for your new Catfish: Trolls spin-off! Also, A lot of the text below is screen capped because whenever I do these Twitter transcript posts they always just get copy and pasted everywhere else without a link.]

BRIANA: They transferred my BD. I should go visit him and ask him why the f**k he still on the wrong path in life smh

@THEHOMIEJOSI: B!tch and what are you doing with your life foh? Lmao wild annoying

BRIANA: Lmaoooo a lot more than you ?

@THEHOMIEJOSI: B!tch like what??? A tv show?? B!tches don’t even like your weak ass story line fam! Shoulda fixed ur face instead of the rest of ur body ho

@THEHOMIEJOSI: No b!tch YOU sound mad everyday of your life boohoo crying to your fans like a lame ass hoe ?? get it together bozo 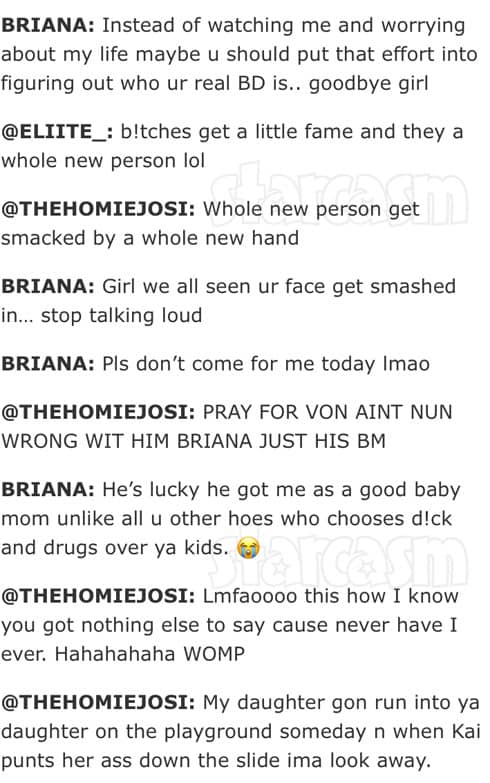 BRIANA: And don’t talk about my child when u don’t even have urs to begin with…… stupiddddddd

@THEHOMIEJOSI: Who doesn’t??? Lmfao b!tch I’ll smack fire out your ass and I’ll punt both ya kids in their sh!t

BRIANA: And don’t come for me about being a horrible baby momma when u don’t even have rights to ur own kid

BRIANA: We can go for days, just lmk lol

@THEHOMIEJOSI: Notice all her fans can’t spell for sh!t. Bunch of Down syndrome ass n*ggas

@THEHOMIEJOSI: Y’all fail to realize that Kissimmee so small ima eventually run into you and I put it on my life I ain’t gonna be the shook one

@THEHOMIEJOSI: Bring up my daughter b!tch I’ll tip your daughter stroller over and smack you after b!tch I’m disrespectful 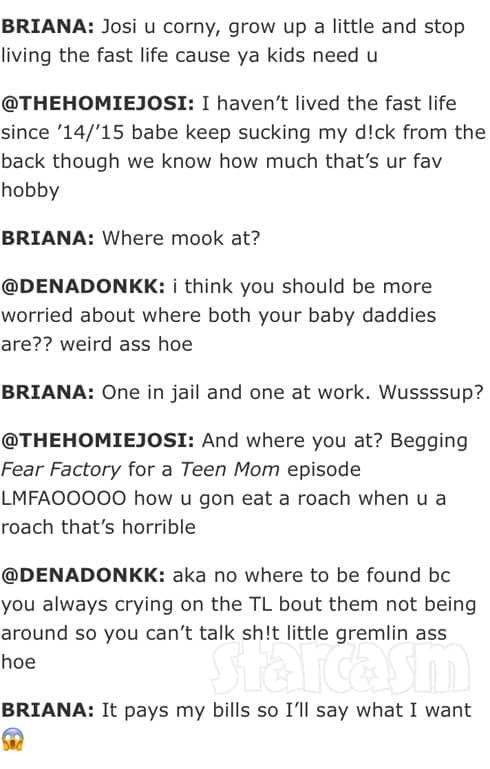 @DENADONKK: cause you a weak ass wh0re crying for attention, you were willing to put your child up for adoption sis.. you lost right there

BRIANA: Least I decided to keep her and be a mom unlike some other ppl YOU know lol

@DENADONKK: the fact that even crossed your mind makes you a sad ass hoe. lol how you sound ?? “least i decided to keep her” and she has rights sooo???

BRIANA: Yea maybe it’ll take some of the water weight off

@DENADONKK: baby girl that doesn’t offend me ever , at least my p*ssy didn’t gross everyone out on snap ? have a good day honey

BRIANA: Someone tell yamin I’ll pay for the DNA test

@THEHOMIEJOSI: @_BrianaDejesus I know in your heart you know I’ll smack the dog sh!t outta you in real life. I do this sh!t b!tch. Hope I run into you?

BRIANA: U talking big cause u pregnant. Stop having kids if u can’t support them. Get off the government and get a real job

@THEHOMIEJOSI: Baby I been talking big all my life this ain’t new to me! Where are you working again?

BRIANA: Exactly, I work a regular 9-5 job in timeshare, been there for almost 4 years. I can handle mine without this MTV sh!t

@THEHOMIEJOSI: You keep bragging about sh!t you posed to do you not in middle school you Down syndrome in the face ass b!tch WE GROWN U POSED TO DO THIS!!

BRIANA: Exactly so hop on the “suppose to” train and get with it fams. If not don’t comment on my life or what I do 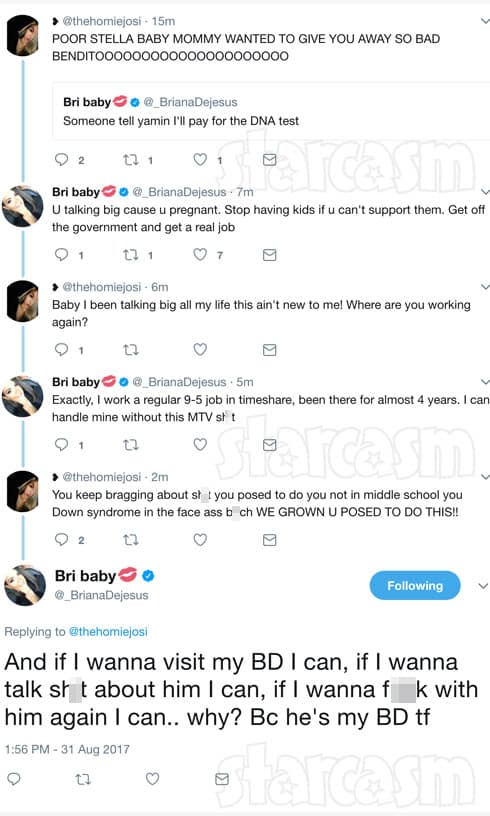 @THEHOMIEJOSI: Like I said babe I’ll see you eventually and I hope you not wearing that public defender suit either [This is in reference to Briana’s VMAs look]

BRIANA: Lmfao don’t end up in jail a second time and miss out on ur kids life AGAIN

@THEHOMIEJOSI: I love it when b!tches say I’m gully when I’m pregnant like I haven’t been the same b!tch since middle school lol YOU gully cus I’m pregnant

@_IMFLAWLESSBTCH: Lol had another kid just to stay on the show like the rest of them hoes lol they’re all paid actors on their own life so sad

BRIANA: I actually didn’t have another kid to stay on the show… MTV approached me, not the other way around

BRIANA: All these petty girls commenting on my life like they getting paid for it??? Lol

@_IMFLAWLESSBTCH: I’m talking about u … not to you.. lol

@BRIANNATATYANNA: She’s shook cause you replied back Briana she’s an internet thug,how you gonna get mad she responded back when you’re spitting on her name ?

@_IMFLAWLESSBTCH: lol Hoe she gets paid to be spoken about that’s all we doing baby girl!

@_IMFLAWLESSBTCH: U a Hoe for following a Hoe like a sick puppy so kiss my ass Thotyanna

@BRIANNATATYANNA: Lmaaooo you’re dead pathetic. Calling people hoes when you have your boobs all out ??? guess it takes a hoe to know one ??‍♀️

@_IMFLAWLESSBTCH: Flaunting dont make u a Hoe! And it damn sure ain’t take surgery to keep my sh!t tight.. don’t talk when u standing up for the worst

@BRIANNATATYANNA: You really acting like you know her personally. Stay in your lane boo and worry about your own life.

@_IMFLAWLESSBTCH: Lmfao who are u ! I do know her personally B!tch and have tried to hit her personally and she ain’t bout it lol girl byeeee u look stupid 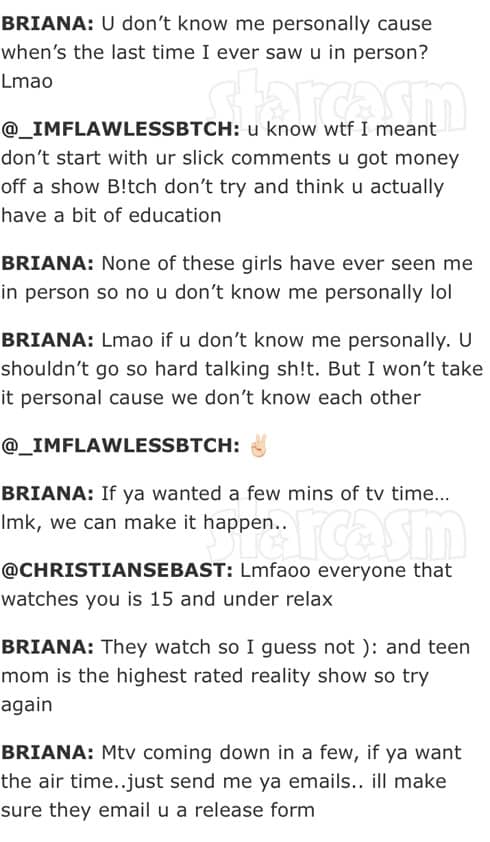 BRIANA: Since ya go so hard for my baby daddy I hope one of ya putting money in his account

BRIANA: U the one that came into my mentions so let’s try this again jail bird

BRIANA: All because I said I wanted to visit my baby daddy in jail lmao

BRIANA: I should have ate a snickers bar before coming on twitter today

@_BRIANAWORLD: Nope because people are always coming at you and always have something to say! You just put them in their places ?

BRIANA: I’m better than going back and fourth with peasants

BRIANA: & btw I didn’t spend 20k on my body, I gots it for the free….that’s what happens when you have real clout??

Jenelle explains why David wore sunglasses inside on Teen Mom 2