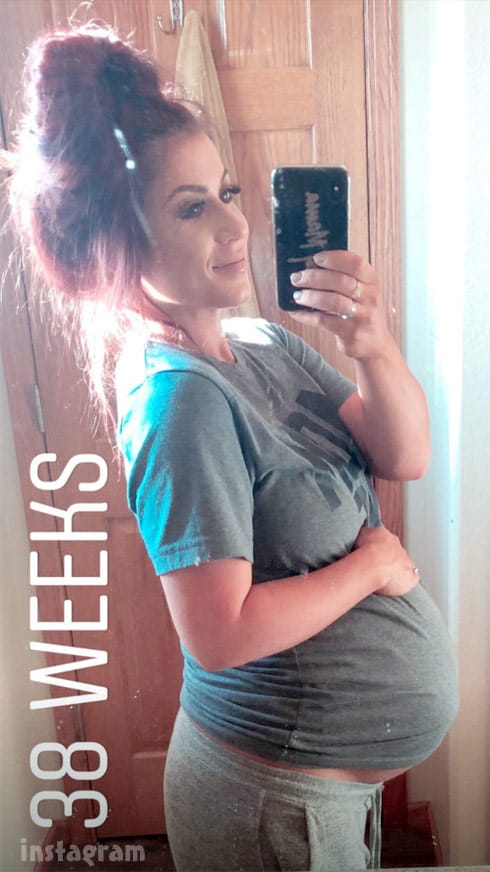 Teen Mom 2 star Chelsea DeBoer is nearing the home stretch of her third pregnancy, and she updated fans with another baby bump photo on Instagram while revealing that she will not be posting on social media when she goes into labor, only after she gives birth.

Chelsea shared the new baby bump pic (above) in her Instagram story and captioned it by reminding us she is 38 weeks along. In the mirror selfie, Chelsea’s belly is quite sizable as her t-shirt can’t even manage to cover it all! #underbump

As mentioned above, Chelsea revealed that her fans on social media will not know she has gone into labor until after her and Cole’s daughter has arrived. Last week one of her Twitter followers wrote that she thought Chelsea was already in labor because she saw a story about it, to which Chelsea responded: “I can promise everyone that whenever I AM in labor…nobody will know..and there def won’t be posts and silly little articles about it ?.” She added: “I will announce when I have her. But the last thing on my mind while I’m in labor is going to be getting on social media.”

Another of Chelsea’s followers seemed to over-react to Chelsea’s tweet, and responded by asking her “If you want privacy though — why be on the reality show about your life? I guess I don’t get it.” Chelsea calmly replied: “I watch a lot of reality television and I would never expect ANYONE to give up rights to any and all privacy just because they are on a tv show??‍♀️ idk! That’s just my opinion though…Plus…all I was saying was that I don’t plan on being on social media or announcing to everyone when im in labor. Will definitely announce once she’s here!”

And speaking of Chelsea calmly replying, that’s exactly what she did during this season’s Teen Mom 2 Reunion special when Dr. Drew asked about her ex Adam Lind. One Twitter user reflected on how much Chelsea had changed since her former appearances on the Teen Mom 2 Reunion, and Chelsea’s dad Randy Houska shared his proud reflections on how much his daughter has matured over the years:

TWEET: Thinking about seeing @ChelseaHouska crying over those nasty texts from Adam in 16&P, and seeing her now happily married, expecting baby #3 is such a beautiful thing. It makes my heart feel full. #TeenMom2 ?❤?

RANDY: I watched just now, remembering those painful phone calls and tearful discussions. Now I watch @ChelseaHouska talk it out straight with @drdrew and see the strong woman that I always knew was hiding under the pain…And now, 9 years later, I discover terms like gaslighting and toxic traumatic bonding. Does coining names means easier to address? Doubtful. I have yet to figure my place in helping others overcome this. Gotta do something tho. Ideas out there?

TWEET [Mommy Lost It]: As someone who is currently going through, it helps a lot just seeing you’re not alone. Especially when you see that person break free from the cycle. There does need to be more support groups, and definitely more knowledge spread about it.

RANDY: Exactly! Victims see themselves as alone, when they are not alone. Their abuser sees no value in them other than for their own power over them so they feel they have no value. In reality though, there are family and friends that see great value but cannot get thru to them

TWEET [Mommy Lost It]: That is exactly how I felt. I’ve seen people on tv, such as Chelsea, grow and blossom because she got out of the cycle. And she got her happily ever after. I am working on that with support form family and friends now. But her story as helped me a lot

RANDY: Well Mommy Lost It, I believe you may be finding it #HangInThere

If you missed any of Chelsea’s previous baby bump photos you can check out her sublime professional maternity shots here and here, and some of her earlier baby bump selfies here.