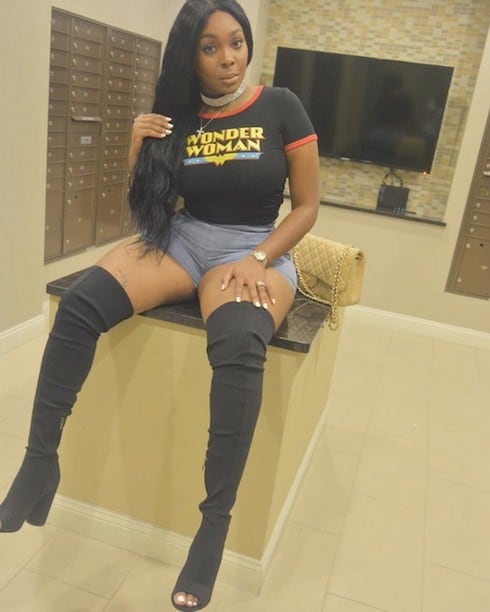 VH1 has just announced the new cast members for Love & Hip Hop Atlanta Season 6, and Glam Shop CEO Sierra Gates is one of the headliners. The 25-year-old has been a growing presence in the Atlanta fashion scene for years, and, thanks to her humble beginnings, looks to be a perfect addition to the show’s cast.

It’s fitting, when you consider how important work has been in getting Sierra ahead in life, that the most complete LHHATL Sierra Gates bio currently available actually comes from her official Glam Shop page. Sierra, a native of Decatur GA, began working as a makeup artist at the South DeKalb Mall at the age of 16.

But hers wasn’t any casual, part-time gig–Sierra had her first child, daughter Paris, at the age of 15, and needed money to help provide for the baby.

See I remember having you at 15 years old. Being homeless with you. "THEN" I remember getting on my feet at 17 working my ass off. I remember every Saturday missing every dance show and you were so sad, I had to work I was scared of you going without. Long story short. I'm 27 your almost 12 it's Saturday and I'm the #BOSS so it ain't no working for me today I'm screaming "Go Paris" till my face turn blue. #FinallyMadeit #MyMiniMe #7yearbusinessOwner #ThankyouGod Y'all go book at #TheGlamShop one of #Atlantas #HottestSalons

By 18, Sierra had her GED in hand, and was looking toward bigger and better things with her first attempt at her own line of makeup. But the line failed–and, for at least a moment, it felt like everything had stalled.

Fortunately for Sierra, personal happiness was the salve for her professional agony. She fell in love with the man she’s called her husband for nearly seven years, and had a second child–Mason, her first son:

Every time he call I come? 6 years married still get butterflies when I see him. #MINES❤️

He small but he heavy thou… I birth him.. #YoungKings

It sounds like family gave Sierra the push she needed. She opened her first Glam Shop location 2010, and has since taken her brand across Metro Atlanta. Then, “at the urging of her husband,” Sierra followed that success up with a second attempt at her own line of cosmetics–which turned out to be a hit. (You can check them out for yourself here.)

No word yet on who Sierra’s allies and enemies will be among the rest of the cast. But, if early looks are any indication, she’s using her talents to win friends. Here’s the result of Sierra’s work on Tammy Rivera:

Sierra doesn’t use her Twitter account much, though that may change once LHHATL Season 6 drops. Instagram is Sierra’s social media outlet of choice; you can follow her here. And you can see more of her work as a stylist–or book yourself an appointment–by going to The Glam Shop ATL’s official site here.