Melissa Morris, the subject of a special 2 hour premiere episode of TLC’s new show My 600-lb Life, was filmed by the network over the last seven years as she struggled to lose over 500 pounds. Formerly tipping the scales at 673 pounds, she now triumphantly weighs in at 170.

TLC followed Melissa and four other people weighing over 600 pounds as they went through gastric bypass surgery, and the years of weight loss that followed. They were some of the heaviest people to ever receive that procedure. Even though the heaviest patients need to lose weight the most, the surgery can be more risky the heavier you are.

Melissa appeared on Good Morning America holding up her old skirt, which absolutely swallows her now: 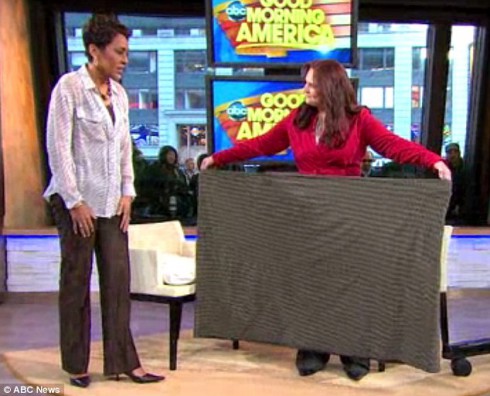 Melissa has been through an amazing journey, and can now do so many things that she was completely unable to do before. That sounds like a dream come true, but Melissa’s new size and abilities are actually causing strife in her marriage to husband Chris. They got married when she was already large, and a major part of the dynamics of their relationship was based on Chris doing things for her. He would also go get the massive amounts of food (2 Big Macs, 20 McNuggets, chocolate bars, soda) that she craved (most morbidly obese people have those around them enabling them, because once they reach a certain point, their mobility constraints prevent them form buying and preparing their own food.) Chris and Melissa having to redefine who they are to each other, and now that’s she a normal size, Chris worries that he’s going to leave her. 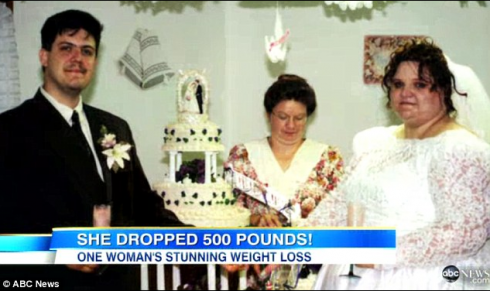 The major catalyst that sparked Melissa to begin her weight loss journey revolved around a poignant moment with her mother, who had stage IV cancer. Melissa was too large to make it into the hospital room when her mother had cancer, but that wasn’t the moment that humbled and changed her forever. When her mother was back at home, and Melissa was able to go see her, her mother, still recovering from surgery, offered to get up and make Melissa something to eat because Melissa would be unable to do it herself. Melissa knew then that she had to make a huge change in her life and get her priorities in order.

Even now that she weighs about a fourth of what she once weighed, Melissa still sees herself as “the 673 pound lady.” Hopefully she’ll be able to get over her roadblocks and insecurities and understand what an amazing thing she’s done, and just appreciate every moment of her new lease on life.

After she got down to 180, she got a job with her bypass surgeon helping other people adjust to life after gastric bypass surgery, fulfilling her first goal of getting a job. Melissa and Chris also rekindled their love. In fact, they found new love between each other that was never there before:

elissa: “He married me because it was something he felt he had to do, and I married him because I didn’t want to be alone. We were never husband and wife. Once the big amounts of weight came off, I wanted to do things for myself. It was hard, we fought a lot.”

Chris “It was just, we were done.”

Melissa: “The thing that changed, he called me from work and asked me on a date, and we started”

Melissa: “I’m a person that needs to be talked to. The love now has just been recent.”

Then, she got pregnant, her second desire, but unfortunately she lost the baby, and sank into a depression. She felt like she was going through it alone because Chris wasn’t grieving with her. Later, she found out that when she was in the hospital having her gastric bypass surgery (with a good chance that she was going to die) Chris was talking to, and making plans to meet with another woman to have sex. His betrayal went much further than that one occurrence, he had been talking to other women for years.

Despite the betrayals, Melissa stayed with Chris, and did get pregnant again. She had gained about 26 pounds when she got pregnant, and she continued to gain some weight throughout the pregnancy. Both Melissa and Chris had gone back to bad eating habits. The baby, Allona Gabrielle Morris, was born via C-Section weighing 5 pounds, 7 ounces.

Chris said that Melissa giving him a daughter was the thing he was most proud of her for, but their relationship was still rocky. When Allona was two months old Melissa found out that Chris had been cheating again. Melissa said that she had forgiven him before because she used be about 700 pounds, but now that he was doing it after she lost weight, she felt like she could no longer blame herself. Melissa wanted to separate, but Chris said he didn’t. Eventually the decided to stay together if Chris sought counseling.

Melissa says at the beginning (and end) of the program: “I could tell you this whole journey was easy, but that would be a lie. But it wouldn’t be a lie to tell you it was worth it.”

Melissa told The Insider that she would not be watching My 600-lb Life because she lived through the events on the show once, and doesn’t want to live through them again.

Giuliana Rancic finally addresses rumors about her weight… kind of