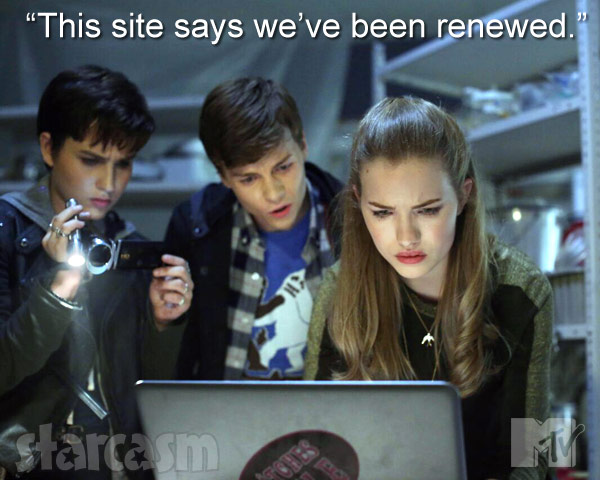 MTV officially announced there will be a Scream Season 2 today during the network’s 2015 Summer TCA Presentation. In addition, MTV shared some exclusive preview clips and made more announcements regarding their shows Finding Carter, America’s Best Dance Crew, Awkward, Faking It, and Ridiculousness.

MTV Executive Vice President of Series Development and Head of Scripted Programming, Mina Lefevre said of the Scream news, “It has been a wonderful experience working with Bob Weinstein and his team who are such connoisseurs of this genre and we are thrilled by how our viewers have responded to the reinvention of Scream. We look forward to another season filled with suspense, horror and more twists and turns.”

Bob Weinstein, co-chairman of The Weinstein Company and Dimension Films, added, “We couldn’t be happier ‘Scream’ has been renewed for a second season and that we have a wonderful working relationship with Doug Herzog, Stephen Friedman, Susanne Daniels, Mina Lefevre and her team. The Scream franchise has been such a huge part of our history and to watch it evolve, find a new generation of fans and succeed at MTV makes this all the more sweet. We promise even more scares, surprises, romance and of course kills in season two.”

But don’t worry about any sort of unsatisfying cliff-hanger finale for the first season! Executive producer Jaime Paglia said at Comic-Con that “there will be satisfying answers” for Season 1 “and bigger questions and mysteries that will be explored in Season 2.”

The Hollywood Reporter adds, “While the killer will be revealed in the season finale, producers said they hope to follow a more traditional format — though they have discussed doing an anthology more along the lines of American Horror Story.”

The Scream Season 2 announcement comes a little less than three weeks after the show’s official Twitter account tweeted and deleted a similar announcement just after the Scream Comic-con panel earlier this month. “Exec producer @JaimePaglia just made an announcement at our #SDCC panel…THERE WILL BE A SEASON 2 OF #MTVSCREAM. HELL YES. — SCREAM” read the tweet.

Here are the rest of MTV’s announcements from the 2015 Summer TCA with video clips:

It’s the best of the best when “ABDC” returns Wednesday, July 29 and kicks of the road to the VMAs. The summer series debuts with six new episodes featuring dance crews from previous seasons of the hit competition series. Prepare for battles showcasing more amazing styles and innovative choreography as these crews keep the audience on the edge of their seats. Fresh talent including host Jason Dundas and an all-new group of judges including T-Pain, Frankie Grande and Teyana Taylor fill out what will be an electrifying season.

In the first half of “Awkward’s” fifth season, Jenna and her friends’ experience at Palos Hills High is almost over. Everyone’s already gotten into college and there’s the sense that anything can happen. When Jenna unwittingly gets school cancelled during a class prank, she becomes popular – just as Matty experiences life on the social outs for the first time. As always, Jenna and Matty are drawn toward each other, but with college looming just a few months away, it’s harder than ever to decide whether they should be together. For all the characters, actions have more adult consequences than ever before: friendships will be tested to the breaking point, relationships will end, and the gang will have to say goodbye to each other and to Palos Hills. The season builds to the twin milestones of prom and graduation where Jenna will have to decide once and for all: can she and Matty make it work?

With high school ending and everyone heading down different tracks, the second half of the fifth season will jump forward to one year to summer in Palos Hills after their first year of post-grad life.

​This season on “Faking It,” Hester High is turned on its head when a new Principal arrives with a mission to get the school back on track. At the same time, Karma and Amy are trying to get their friendship back to normal after Karma learned that Amy slept with Liam. Can they ever get past that betrayal? Will Karma ever forgive Liam? How will Lauren get past Theo’s betrayal? And will she beat Shane for Class President now that the school knows her secret? Speaking of Shane, can he keep his boyfriend Duke from finding out that he’s the one who outed him?

“Faking It” stars Katie Stevens as “Karma,” Rita Volk as “Amy,” Gregg Sulkin as “Liam,” Michael Willett as “Shane” and Bailey De Young as “Lauren.” “Faking It” was created by Dana Min Goodman and Julia Wolov. The series is executive produced by Carter Covington.

In the second half of season two, after the shocking revelation that Carter’s father had a secret son with Lori, Carter’s world is once again thrown into chaos. As Carter gets to know the mysterious brother she never knew she had, she also must figure out who she wants to be and where she really belongs. She ultimately decides to drop out of school to find her own path, and lies her way into a job as a bartender where she sees herself in a whole new light. She’ll even introduce her inner circle to a racy, underground party circuit. Her new, fast lifestyle is the perfect replacement for the tedium of high school, until it speeds out of her control… and she needs her family more than ever.

“Finding Carter” is executive produced by Emily Whitesell (“Brothers & Sisters,” “Dirty Sexy Money,” “Party of Five”). The series was created by Emily Silver. The series was developed by Terri Minsky. Alexander Motlagh is an Executive Producer.

Executive Producer and host Rob Dyrdek returns with co-hosts Sterling “Steelo” Brim and Chanel “West Coast” to break down the most outrageous viral videos. This epic season erupts with hysterical moments as well as first time filming in the “Big Apple” with special guests 50 Cent and Action Bronson. Additional guests during the season include Machine Gun Kelly, Mac Miller, Andy Bell and more!