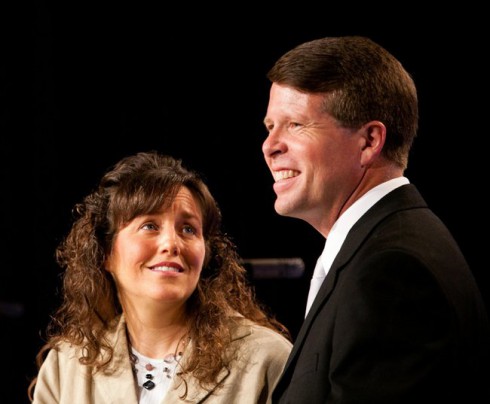 Despite being some of the most devout Christians in popular culture, 19 Kids and Counting‘s Duggar family avoids publicly labeling their faith as anything more than “Christian.” But, among smaller circles, they are among the best-known advocates for Bill Gothard’s ATI homeschooling curriculum and Institute in Basic Life Principles (IBLP) program.

Earlier this year, both of those programs were swept up in controversy as religious leader Bill Gothard was accused of sexually harassing more than 30 young IBLP secretaries throughout the past 40 years. Gothard, who’s helmed IBLP since its creation in 1961, reluctantly resigned from the board in early March so that he could focus on listening to those who “ought against” him. 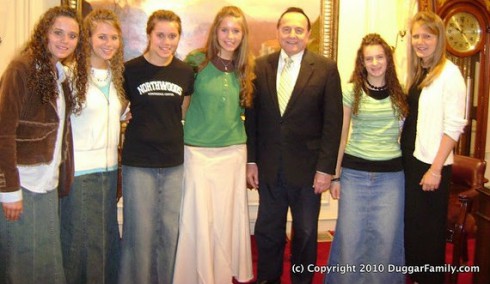 Bill Gothard with some of the Duggar daughters.

Unfortunately, as many IBLP harassment survivors have noted on Recovering Grace, Gothard wasn’t the only corrupt person in power: Back in the early 1980s, his brother was forced to resign after several of his sexual relationships with IBLP secretaries were revealed. Today, another Recovering Grace moderator wrote about the widespread coverups of questionable incidents.

“Harassment was allowed in other departments and not dealt with correctly,” said the anonymous writer, who worked at the IBLP headquarters as a young woman. “Anything negative was kept quiet.”

The women of Recovering Grace maintain “the organization does not intentionally endorse sexual abuse, assault, or harassment.” However, they conclude the “ATI subculture does create an environment in which abusers are often protected by hierarchy status and Institute family culture, while targets and victims are encouraged to remain silent and even submit to abuse.”

Nonetheless, it’s apparent that many IBLP and ATI followers — including the Duggars — are still committed to the programs. In fact, according to the newly released “2014 Family Conference Guide” for ATI and IBLP followers, Jim Bob Duggar and Michelle Duggar are slated to speak at three upcoming national conferences.

The program also indicates current ATI and IBLP leaders (including Gil Bates from United Bates of America) hope to steer attention away from Gothard — calling the programs’ situation “a transition.” As the introduction reads, “How blessed we are by the opportunity this conference provides for us to bring everything back to the Word of God.”

Without any direct mention to Gothard or the controversy (either in the program or other literature recently released), it’s unclear whether IBLP/ATI leaders are actually committed to making changes to prevent similar instances of sexual harassment from happening in the future. If fundamental changes are not made, the women of Recovering Grace worry situations may worsen for the girls at risk.

“It seems unbelievable that a subculture that so emphasizes sexual propriety, denial, and protection would conceal so much sexual misconduct and abuse, but passive facilitation of abuse is endemic to the system. Sexual abusers are attracted to and protected by the system.”