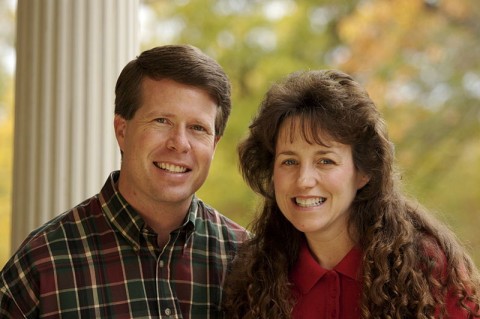 The Michelle and Jim Bob Duggar are continuing their efforts to populate a large country (as to where they’ll all live when this is done – I hear most of Siberia is open) by going for a 19th child. The couple have been doing their marital duties without protection for over twenty years, yet they were surprised about this one.

Michelle Duggar, who has been pregnant 17 other times already didn’t noticed classic signs of pregnancy like stubborn weight gain, a craving for pickles, and since she’s three months along I’m guessing she also ignored her missed period and morning sickness. Also, her 8-month-old baby was getting fussy during feedings, a classic sign of pregnancy due to hormonal changes in the body. Girl has been around this block a few times, she should know.

Michelle says she thought her baby days were over, but she’s only 42. That’s now the base age when celebrities start having kids, and she already knows she fertile. There are quite a few years left in Michelle Duggar’s babymaking time, so she better be prepared for a few more of these “surprises.”

“I was wanting pickles and the older girls were saying, ‘Mom, you only crave these at the very beginning of being pregnant, You kept it from us before, now tell us. Are you?'” Michelle says. “And I kept telling them I wasn’t. I just wanted some pickles.”

“I was in Weight Watchers with Jim Bob and I wasn’t losing any weight,” she says. “I couldn’t figure it out. I was doing what I should. And the baby, who was nursing, was fussy. I kept thinking, ‘This isn’t right. She isn’t teething, she doesn’t have an ear infection. I’m not cheating on my diet, I should be losing weight.’ Then, I put two and two together and wondered if I could possibly be pregnant.”

“I told Jim Bob and he couldn’t keep it in, he was so excited,” she says. “The kids were outside playing on a water slide and he gathered them together and had to share the news. There was all this screaming and yelling.”

When people use the word “yelling” it usually isn’t describing joyous squeals of delight and happiness. All of these kids, save for one, are about to be aunts and uncles and are still helping tend to the last edition to the Duggar family, 8-month-year-old Jordyn-Grace.

Watch below as the Duggars talk to Today’s Meredith Viera. The Duggars’ daughter-in-law Anna, who is expecting as well was also there, and she seemed a little apprehensive.

Congrats to Anna and Michelle, and the rest of the 5.2 million Duggars!

Visit msnbc.com for Breaking News, World News, and News about the Economy

Christina Ricci is a mom!