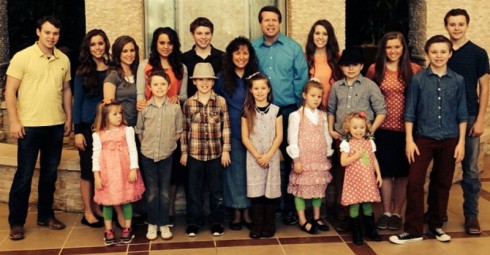 On TLC’s 19 Kids and Counting, Jim Bob and Michelle Duggar speak often about how children are blessings. They speak — or are shown speaking — less often about their strong pro-life beliefs.

Outside of the TV show, the large family spends much of their time promoting the pro-life movement, seeking to repeal Roe vs. Wade and campaigning for political candidates who share their anti-abortion beliefs. 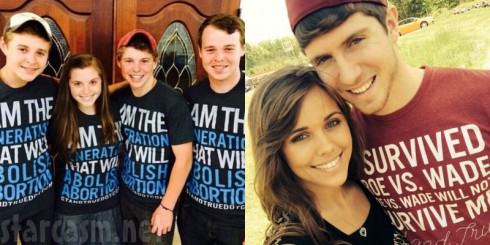 The shirts on the left read, “I am the generation that will abolish abortion.” Ben Seewald’s shirt on the right says, “I survived Roe vs. Wade… Roe vs. Wade will not survive me.”

Although the pro-life/pro-choice debate remains divisive in this country, the Duggars’ beliefs are considered controversial by even some who vote on the same side of the ticket.

“We have since 1973 had 55 million abortions, so what we have going on is a baby holocaust,” Jim Bob said last October while campaigning for Ken Cuccinelli, a Virginia governor hopeful who eventually lost the election.

“Veterinarian clinics for animals in Tennessee have higher standards in health and safety laws than there are for the abortion clinics involving human life,” she said. “We must join together and end the baby holocaust that is taking place right here in Tennessee.”

Although the Duggars don’t represent the popular opinion, the prolific parents were recently called upon to advocate for the proposed Amendment 1 in Tennessee. As it is, the state’s Supreme Court ruled in 2000 that a woman’s “fundamental” right to terminate her pregnancy is protected by the Tennessee Constitution. The proposed Amendment 1 would single out abortion are the single medical procedure that shouldn’t be protected or funded. The proposal has inspired a heated debate, even though Vanderbilt University found a majority of Republicans and vast majority of Democrats oppose the campaign.

Asking the Arkansas-based Duggars to promote the policy seems like a no-brainer for the Amendment 1 campaign, as the family’s show is increasingly popular. However, I’d argue that few viewers actually want to apply all of the Duggars’ beliefs to their own lives.

Amendment 1 will be on Tennessee’s ballot in November.