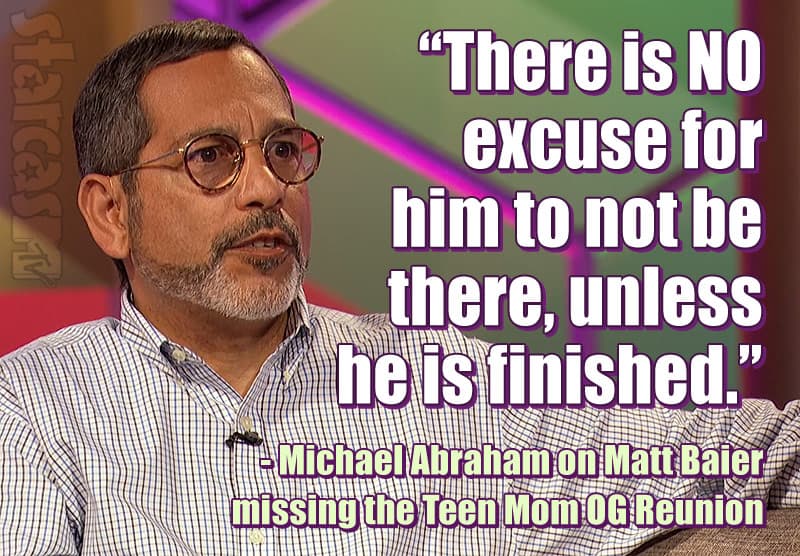 After Teen Mom OG star Amber Portwood shared a tweet about her “new beginning” with “no one holding her back,” rumors began swirling that she had called it quits with fiancé Matt Baier. Yesterday, Matt added fuel to the fires when he announced he would not be attending the reunion taping in New York this weekend because he is “having surgery.”

Since Amber is not saying anything about a potential split or Matt’s mystery surgery, we reached out the person second-most affected by Matt’s absence at the reunion — Michael Abraham. (Fans of Teen Mom OG will recall that Michael was seriously injured at last season’s infamous reunion brawl when Matt shoved him off the stage.)

Michael, who was still tired from playing the part of mascot Coba once again at Froco’s one-year anniversary party, was kind enough to share his thoughts on all of the recent Mamber developments.

STARCASM: What do you think of Matt missing out on the reunion?

MICHAEL: I saw the rumors … so called surgery… possibly a real break up from Amber… we will have to see. But I’ll say this – if he’s not there it shows he is not committed to supporting Amber no matter what ….. AND he is NOT committed to the MTV Teen Mom franchise. And yes, I can say this. I’ve been here supporting my daughter from the beginning and he has NOT. We all knew the filming date…. we were all informed – there is NO excuse for him to not be there, unless he is finished.

S: Given all that went down at the last reunion, what was your plan to deal with Matt this time around if he had shown up?

M: There was no plan regarding “Him”. If there was any hope it would have been Matt possibly apologizing for assaulting me last October and taking responsibility for his actions. A “real” apology could close this matter. Only Amber and Matt resorted to physical actions that day, and name calling does not justify any physical violence. This issue is not over, and this time Matt might not be able to sidestep his responsibilities.

S: What do you mean that Matt might not be able to “sidestep his responsibilities?”

Like I told you in another interview – stay tuned. 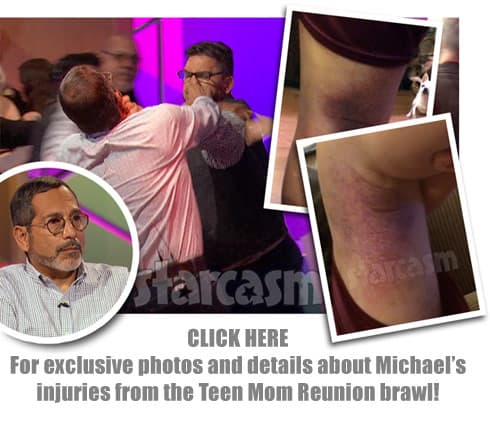 S: So what are your thoughts on the rumors that Amber has finally broken things off with Matt?

M: I’ll believe it when I see it because all the false and manipulated public relation stories that have recently come from them and their management are ever changing. But, if it’s true, I’ll be the happiest for Amber because just like all the mothers of Teen Mom OG and Teen Mom 2 – I wish them all to have healthy, happy, and prosperous lives. I hope this is real for Amber’s sake because she deserves better for her life — period.

S: What do you think will be the major topic of conversation for you, Farrah, and Debra this weekend? Is that something you can talk about?

M: Honestly, I can’t … but I bet we will discuss how there have been making healthy strides with our (Abraham) family relationships, as seen on WETV’s current Marriage Boot Camp: Reality Stars Family Edition, which is currently being aired on Friday nights. It was a hard but rewarding experience for most members of the families (and ours) that are on this show.

Thanks again to Michael for taking time away from being Super Grandpa and the Froco mascot to speak with us. We certainly look forward to seeing how this Teen Mom OG Reunion plays out — with or without Matt Baier.