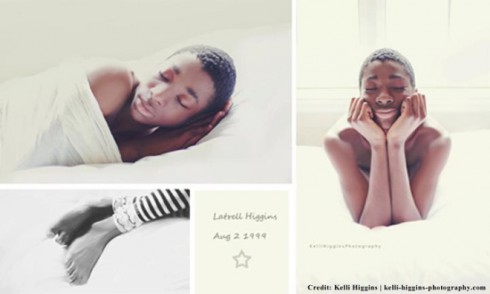 13-year-old Latrell Higgins and his sister were adopted by professional photographer Kelli Higgins three years ago. Recently they were talking about newborn photographers over the dinner table and Latrell was kind of bummed that he didn’t have any newborn photos of himself. Latrell’s 12-year-old sister Alycia suggested, as a joke, that Kelli use Latrell as the subject of some very special “newborn” photography.

Kelli told The Huffington Post that they had a fun time, but could barely get a shot of Latrell because of the laughter.

They posted the finished result on her professional Facebook page with this caption: “Here’s my sweet not so little Newborn! His name is Latrell and weighs 112lbs.”

The result is the perfect mixture of hilariously ridiculous and sweet! One of the pics that didn’t make the cut was a photo of Latrell in a fuzzy hat. “Even though we really did this in humor I think people saw the sweet side of it and liked the story behind the photo,” Kelli said.

The Higgins family is pretty large; they already had six biological children when they adopted Latrell and his sister Chanya three years ago (at ages 10 and 5 at the time.) She was pregnant with with her sixth child when they decided to adopt Latrell and Chanya.

“These children, once they get past a certain age, they don’t find homes and they age out of foster care. They have to figure out the world on their own and there’s no one to go back to as an adult. Where do you go for Christmas? It’s just horrible, it’s heartbreaking.”

Complete list of 2010 Emmy nominations with video of the announcements